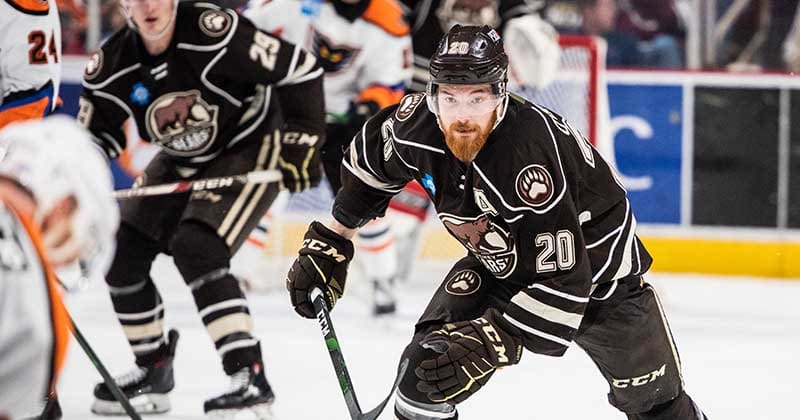 The Hershey Bears scored three times in the final period to blitz past the Lehigh Valley Phantoms, 5-3, on Sunday night in front of 10,437 fans at Giant Center. Brett Leason earned three assists to tie a career-high, single-game point total, and Hershey extended its power play goal streak to six games.

The Bears scored the opening period's only tally at the 5:35 mark on Phantoms goaltender J.F. Berube. Liam O'Brien found a loose biscuit on the doorstep and chipped the puck into the cage for his 10th goal of the season. Shots after 20 minutes were 8-7 Lehigh Valley.

In the second period, the Chocolate and White were held to only three shots on goal, but converted on their first attempt. Hershey started the frame on a power play after Issac Ratcliffe was guilty of elbowing at 19:52 in the previous period. On the ensuing man-advantage, Christian Djoos unleashed a shot from the blueline which alluded Berube and doubled his team's lead at 1:26.

Much like Hershey's game on Friday night at Binghamton, their 2-0 lead soon evaporated. At 8:11, Morgan Frost fielded a fortunate bounce off the glass behind Pheonix Copley, and blasted a shot into the net, high glove-side. Late in the period, Lehigh Valley found the equalizer on Maksim Sushko's 10th goal of the campaign at 18:21. Shots after 40 minutes were 20-10 Phantoms with the score even 2-2.

Copley stood tall for the Bears in the third period to keep the score tied, and Bobby Nardella scored a highlight reel goal at 8:50 to put his team in front. Wrapping around the perimeter in the offensive zone, Nardella sniped a shot to the top corner from the right wing to regain Hershey's advantage. Nardella's goal shifted the momentum into the Bears' favor, and Beck Malenstyn tallied a key insurance, and eventual game-winning goal at 16:03.

Lehigh Valley pulled Berube in favor of the extra attacker with over two minutes remaining, and Andy Andreoff brought the Phantoms within one goal at 18:14. Brian Pinho countered for the Chocolate and White and punctuated the game with an empty net goal at 19:49 to round out a 5-3 final. Hershey's record improves to 32-16-3-3, and are now 8-1-1-0 in 10 meetings with Lehigh Valley in 2019-20.

The Hershey Bears return to action and kickoff a brief, two-game weekend on Friday, Feb. 21 at Wilkes-Barre/Scranton, before battling the Bridgeport Sound Tigers at Webster Bank Arena the following night. Puck drop between the Bears and Penguins is slated for 7:05 PM at Mohegan Sun Arena. Voice of the Bears Zack Fisch will have the call on the Bears Radio Network.