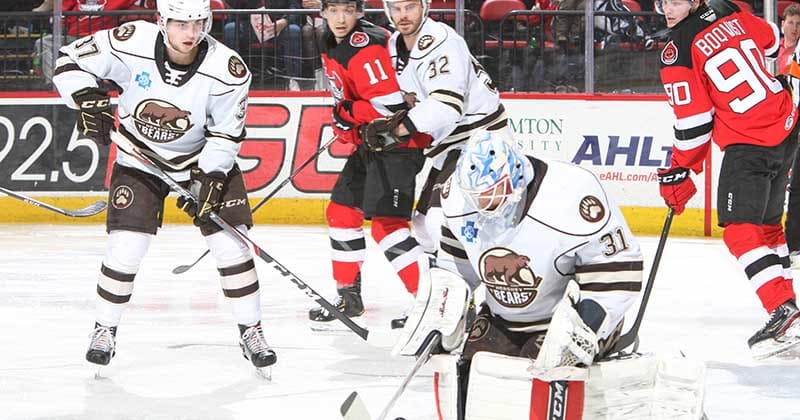 Bears Fall to Devils in Overtime

Garrett Pilon scored twice for the Chocolate and White, but the Hershey Bears dropped a 4-3 overtime decision to the Binghamton Devils on Friday night. Jesper Boqvist tied the score with 2:18 remaining before Michael McLeod walked the game off for the Devils in sudden-death.

The Bears jumped out to a 2-0 advantage in the opening frame before the Devils rallied to draw even. At 2:26, Tyler Lewington bombed a shot past Devils' Cory Schneider after activating from the right point. Kody Clark received the lone helper after feeding Lewington on the backhand from behind the net. At 12:00, Hershey doubled their lead on Pilon's first of two power play strikes. After a pass across deflected to Pilon, he beat Schneider high, glove-side.

Before the period expired, Binghamton solved Pheonix Copley to cut their deficit in half. Marian Studenic crept into the low-slot and buried a pass to the front from Egor Sharangovich at 15:09. Shots after 20 minutes were 12-7 Hershey with the Bears leading by one.

Next period, Boqvist scored his first of two game-tying goals. On the man-advantage, Boqvist released a shot from the left wing after gaining the zone and beat Copley along the stick side at 5:13. Back to work on the power play after Binghamton's Colby Sissons was boxed for hooking at 17:14, Pilon struck again. Positioned once more between the face-off circles, he received a feed from Philippe Maillet and beat Schneider at 17:44. Shots after 40 minutes were 25-15 Bears with the Chocolate and White clinging to a one-goal lead.

Down the stretch in the final frame, Binghamton elected to pull Schneider in favor of an extra attacker after the Bears were guilty of icing. On the 6-on-5 advantage, Boqvist scored his second at 17:42 to even the score at 3-3 and force sudden-death overtime. Only 30 seconds into the extra session, McLeod walked in unmarked on Copley and buried his seventh goal of the season to complete Binghamton's comeback.

Hershey returns to action tomorrow night to complete a home-and-home set against the Binghamton Devils. It's Ames Janitorial Services Rally Towel Night for the first 5,000 fans at Giant Center. Puck drop between the Bears and Devils is scheduled for 7 PM. Ticket information is available online at HersheyBears.com.