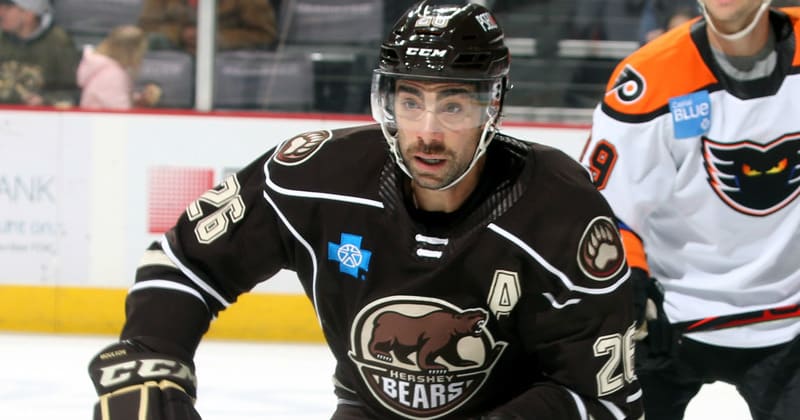 Matt Moulson scored twice and tallied his 300th career American Hockey League point to lead the Hershey Bears past the Lehigh Valley Phantoms, 5-2, on Sunday evening at PPL Center. For the second straight night, the Bears scored twice on the man-advantage, accompanied by a perfect effort on the penalty kill. Hershey's victory marked their fifth straight away from Giant Center, tying a season-high.

Only 69 seconds into the game, Moulson converted a net front tap in for his 17th goal of the season. Joe Snively created a turnover at the blue line, and Philippe Maillet slid a pass across the low-slot to draw Phantoms goalender J.F. Berube out of position.

At 1:39, Mikhail Vorobyev was boxed for high-sticking to send the Chocolate and White to their first power play. On the ensuing man-advantage, Maillet worked the puck to the wing for Christian Djoos, who fed Garrett Pilon between the face-off circles. From the slot, Pilon fired and scored his 14th goal of the season at 3:01. Shots after 20 minutes were 11-6 Bears with the Chocolate and White leading 2-0.

Lehigh Valley bounced back with a pair in the middle stanza to send a 2-2 deadlock into the final period. Steven Swavely scored his first goal of the season after walking in front of the Bears net and stuffing a shot five-hole on Vitek Vanecek at 2:56. Isaac Ratcliffe converted on a Hershey defensive zone turnover and released a quick shot past Vanecek low to the ice at 16:46. Shots after 40 minutes were 18-16 Lehigh Valley.

The Bears earned another power play chance in the third courtesy of a Nate Prosser tripping infraction at 8:35. On a crisp passing play, Moulson buried his second goal of the game into an open net at 9:11 setup by Bobby Nardella and Djoos to give Hershey a 3-2 edge.

Protecting a one-goal advantage, Brett Leason doubled his team's lead with a key insurance tally at 14:07. Dancing to the net, Leason lifted a backhander past Berube to score his first goal since Dec. 1. Djoos recorded the secondary helper on the play for his third assist of the afternoon. Maillet joined Djoos with a three assist night, earning the lone assist on Brian Pinho's empty net goal at 19:21.

The Bears return to action on Friday, Feb. 14 with the first of four meetings in 2019-20 against the Binghamton Devils. Puck drop from Binghamton is scheduled for 7:05 PM. Voice of the Bears Zack Fisch will have the call on the Bears Radio Network.