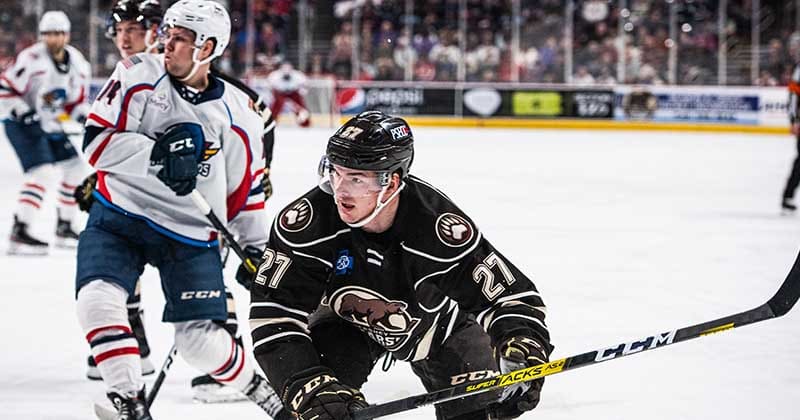 The Hershey Bears won their 30th game of the season courtesy of a 5-2 victory over the Springfield Thunderbirds on Saturday night at Giant Center. The victory clinched a season-series win over Springfield, producing a 4-2-0-0 record across six meetings. Hershey finishes the night in sole possession of 1st place in the Atlantic Division after the Hartford Wolf Pack suffered an overtime loss to the Charlotte Checkers.
Both teams were held off the scoresheet in the opening 20 minutes with the Bears leading in shots, 10-5. Early in the next period, the Chocolate and White broke through on T-Birds goaltender Ryan Bednard. At 2:40, Axel Jonsson-Fjallby raced up ice along the right wing, and sniped a shot top shelf for his 11th of the season. Philippe Maillet also converted his 11th goal of the season at 9:23 to provide Hershey a 2-0 cushion. Before the frame expired, Henrik Borgstrom solved Pheonix Copley at 15:43 to cut Springfield's deficit in half. Shots after 40 minutes were 18-14 Bears.

Hershey's special teams put the hammer down with two power play strikes in the final period to increase their lead. Christian Djoos beat Bednard for his fourth goal of the season at 3:58, after Tommy Cross was boxed for slashing at 3:18 to provide the Bears a power play. Djoos completed a three point performance after assisting on an Alex Alexeyev goal at 12:08 to increase his team's advantage to 4-1.

Springfield tallied their second goal only 35 seconds later after Joel Lowry buried a centering pass from Rodrigo Abols at 12:43. The Bears were granted a late game power play chance to again restore a three-goal advantage, and the Chocolate and White capitalized. Cliff Pu served a bench minor for too many men at 15:16, and Maillet scored his second goal of the night at 16:34. Alexeyev and Garrett Pilon both earned helpers to round out multi-point performances.

Hershey's power play finished the night 2-for-3, and the penalty kill went a perfect 3-for-3. Final shots on goal totaled 31-24 in favor of the Bears. Hershey's record improved to 30-15-2-3, and are the first team in the Atlantic Division, second team in the Eastern Conference to reach the 30 win plateau.

The Hershey Bears return to action and complete three games in three nights tomorrow afternoon against the Lehigh Valley Phantoms. Puck drop from the PPL Center is scheduled for 3:05 PM. Voice of the Bears Zack Fisch will have the call on the Bears Radio Network.