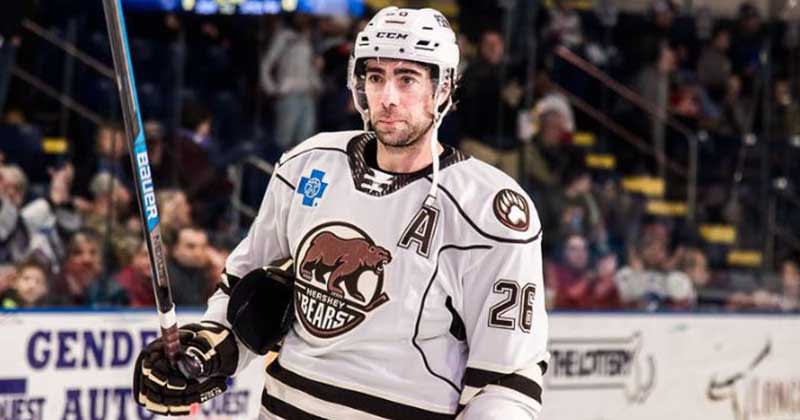 Matt Moulson scored twice in his 1,000th professional game, and the Hershey Bears scored four unanswered goals to down the Springfield Thunderbirds, 5-2, on Friday night at the MassMutual Center.

Similar to Wednesday night, the Bears fell behind early to Springfield, but saw a quick response in the 1st period. Only 2:03 in, Aleksi Heponiemi scored his first American Hockey League goal after beating Bears goaltender Pheonix Copley. Hershey drew even at 11:22 on a 2-on-1 rush to even the score. Tyler Lewington connected with Shane Gersich on a homerun stretch pass, and Gersich ripped a shot five-hole past T-Birds goaltender Samuel Montembeault. Before the period expired, Springfield regained the advantage. On a rush up ice, Ethan Prow scored his fifth goal of the season at 16:37 to put his club in front at first intermission. Shots after 20 minutes were 11-5 Hershey.

Next frame, the Chocolate and White responded with three unanswered goals, all coming courtesy of special teams. Hershey earned their first power play chance of the night after Dryden Hunt was whistled for cross-checking at 3:45. On the man-advantage, Garrett Pilon buried a pass from Philippe Maillet beneath the goal line and into the cage to knot the score at 2-2.

The Bears went on the penalty kill from a Tyler Lewington tripping minor at 7:54, and Hershey soon converted shorthanded. Brian Pinho stripped Prow of the puck at the blue line, and raced up ice all alone on a breakaway. Pinho beat Montembeault along the glove side at 8:13 for his 13th goal of the season, providing Hershey their first lead of the night.

Hershey received an extended power play chance on a Ryan Haggerty five-minute boarding major penalty. On the major power play, Matt Moulson scored in his 1,000th professional game at the net front at 14:01. Shots after 40 minutes were 29-18 with the Chocolate and White leading 4-2.

Protecting a two-goal lead in the 3rd period, Moulson appropriately iced the game with an empty net, unassisted tally at 17:50 to complete a 5-2 final. Shots on goal concluded 40-27 Hershey, marking a new single-game season-high for the Chocolate and White in 2019-20. Special teams finished 2-for-4 on the power play and a perfect 5-for-5 on the penalty kill.

The Hershey Bears conclude their weekend with one final game before the 2020 AHL All-Star Break tomorrow night in Providence. The Bears and Bruins will square off for the fifth of six meetings tomorrow night from the Dunkin' Donuts Center. Puck drop is scheduled for 7:05 PM. Voice of the Bears Zack Fisch will have the radio call on the Bears Radio Network.