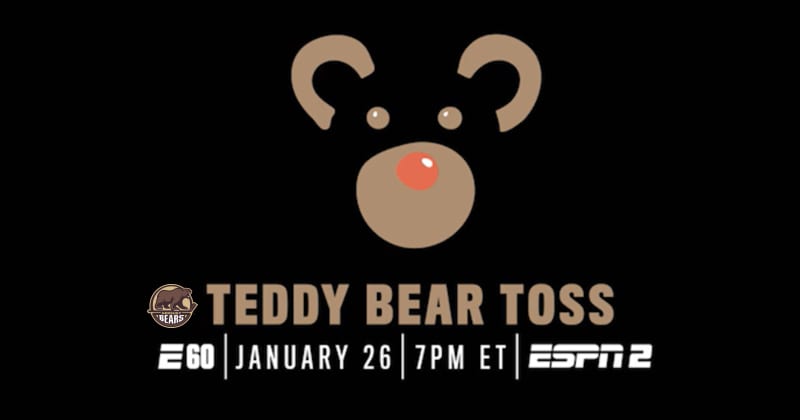 The Hershey Bears are proud to announce the club's world-record CommunityAid and abc27 Teddy Bear Toss will be featured on ESPN's newsmagazine program, E:60, this Sunday, Jan. 26 at 7 p.m. Eastern on ESPN2.

The club's annual Teddy Bear Toss was held Dec. 1, and the Bears and their fans smashed their own world record, collecting 45,650 stuffed animals for local charities. ESPN's E:60 crew was on-site in Hershey for two days in December, capturing the event itself, the counting process, and the distribution of teddy bears to children at Milton Hershey School.

"We're thrilled to have worked with ESPN and E:60 in spotlighting our world-record Teddy Bear Toss," said Vice President of Hockey Operations Bryan Helmer. "This event has become a sensation around the world, and the generosity of our fan base and the entire Central Pennsylvania community is featured beautifully in this piece. Sunday's E:60 will be a must-see."

The piece is narrated by legendary ESPN hockey analyst Barry Melrose, who is a former NHL and AHL defender and coach. Featured in the story are interviews with Hershey Bears forward Beck Malenstyn, broadcaster Zack Fisch, Brock Kerchner of The Old Barn Hockey Show, and Kyle Mace of ChocolateHockey.com. The piece profiles Gabby Kerchner, a 10-year-old from Mechanicsburg who collected 10,136 stuffed animals for the Teddy Bear Toss as part of her organization, Gabby's Acts of Kindness.

ESPN's Scott Cikowski produced the piece. A trailer is available via the Hershey Bears Facebook and Twitter pages.