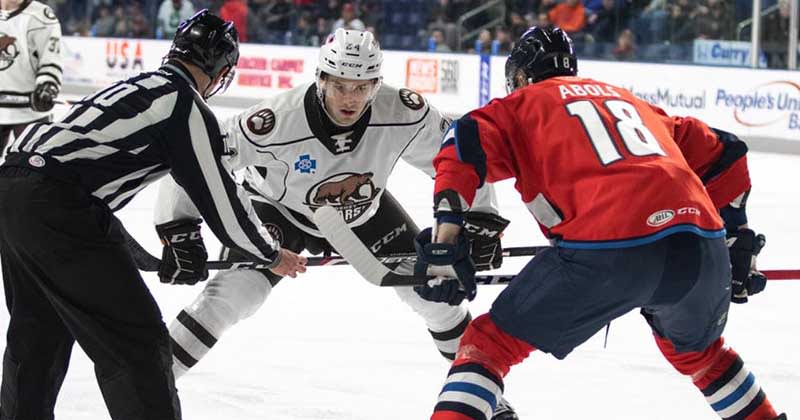 The Hershey Bears fell to the Springfield Thunderbirds by a 5-2 count on Wednesday night at the MassMutual Center. Down 4-0 after 40 minutes, Alex Alexeyev and Philippe Maillet tallied to give the Bears a fighting chance before allowing an empty net goal in the final minute. Both teams are set to rematch on Friday at 7:05 PM.
The Thunderbirds wasted little time out of the starting gate to begin their offensive attack. Only 3:25 in, Jonathan Ang capitalized on a Bears defensive zone turnover, cut to the net front, and beat Vitek Vanecek low to the ice. Springfield doubled their advantage after tallying on the backend of a 5-on-3 advantage later in the frame. Erik Burgdoerfer was whistled for holding at 11:17, and Liam O'Brien was boxed for delay of game 1:07 later to provide a two-man advantage for the T-Birds. Three seconds after the initial penalty to Burgdoerfer expired, Aleksi Saarela blasted a power play goal from the point at 13:20. Shots after 20 minutes were 15-8 Springfield with the Bears trailing.

Next period, the Chocolate and White displayed strong offensive zone shifts, but were unable to hit pay-dirt. After not being rewarded, the T-Birds countered and scored twice within a span of 70 seconds to open a 4-0 cushion. After two failed clear attempts in the defensive zone, Daniel Audette beat Vanecek through a screen at 15:14. At 16:24, Ang notched his second goal of the night after burying his own rebound into an open age. Shots after 40 minutes were 24-21 Springfield.

Hershey concluded a back-to-back set in Charlotte one week earlier with a three goal 3rd period, and looked to mount a similar comeback. Alex Alexeyev scored his second goal of the season, and first since Opening Night on Oct. 5 at 1:46 of the final period to give the Chocolate and White life. Tyler Lewington and Matt Moulson earned the helpers after a center point shot on a delayed penalty alluded T-Birds goaltender Ryan Bednard. Down to the final minutes, Vanecek was pulled in favor of an extra attacker. On the 6-on-5 advantage, Philippe Maillet buried the rebound of a Garrett Pilon shot to bring the Bears within 4-2 at 17:17. But in the final minute, Owen Tippett scored his 18th goal of the season courtesy of an empty net strike at 19:25 to complete a 5-2 final. Final shots on goal tallied 36-27 Hershey after out shooting the Thunderbirds 17-3 in the last 20 minutes.

The Bears overall record shifts to 25-14-2-3 through 44 games. Following an off day, both teams are slated to rematch Friday night at the MassMutual Center. Voice of the Bears Zack Fisch will have the call on the Bears Radio Network with puck drop at 7:05 PM, and pregame hitting the airwaves at 6:35 PM.