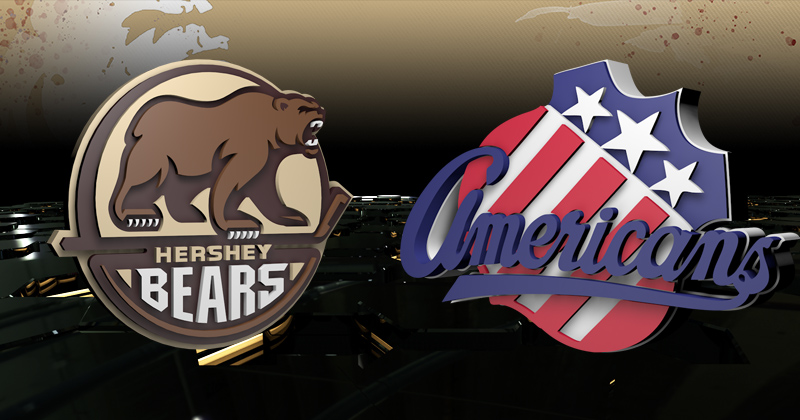 Tonight, the Hershey Bears and Rochester Americans conclude their brief, two-game set for the 2019-20 season. Both teams previously met on Oct. 23, with the Americans claiming a 5-1 victory over the Bears at BlueCross Arena.

LAST TIME OUT:
The Bears are coming off a dramatic 5-4 overtime win versus Hartford last night at Giant Center. Beck Malenstyn gave Hershey a 1-0 lead only 2:02 into the game, but the Wolf Pack scored three times in the first period to put Hershey in a 3-1 hole. Garrett Pilon and Shane Gersich scored in the second period to tie the score, and the teams traded goals in the third period before Tyler Lewington tallied the overtime winning goal just 58 seconds into the extra frame. Each team went 0-for-1 on the power play in the game and Hershey out shot Hartford 31-22 in the win. The Americans were in action last night, falling 4-0 at Lehigh Valley. Rochester could not beat Lehigh Valley goaltender J.F. Berube as the netminder stopped all 20 shots he faced to hand Rochester a 6th straight loss.
OLD-SCHOOL BATTLE:
Tonight's game sees the two oldest teams in the American Hockey League square off. The Bears and Americans have a long history, dating back to Rochester joining the AHL in 1956 after the Pittsburgh Hornets franchise was forced to fold. Tonight is the 460th all-time meeting between the two clubs, with Hershey claiming 221 victories along the way. This evening marks the final meeting between the two clubs after the Amerks upended the Bears 5-1 at the BlueCross Arena on Oct. 23. Axel Jonsson-Fjallby had Hershey's lone goal that evening, while C.J. Smith had a goal and an assist for Rochester. Hershey's roster features former Amerk Erik Burgdoerfer. The veteran defender skated with Rochester for 52 games during the 2016-17 campaign, scoring 17 points (one goal, 16 assists).

LEWY, LEWY:
Tyler Lewington is fresh off a career performance in last night's win. The blue liner entered Saturday's game with just three assists this season in 25 games. He tallied twice yesterday, giving him the first multi-goal game in his 288-game professional career (8 NHL games, 266 AHL games, 14 ECHL games). It was also just the second game-winning goal of his AHL career, with the previous occurrence coming on Apr. 7, 2017 in a 3-2 win at Rochester. Lewington now has 54 points (14 goals, 40 assists) in his tenure with Hershey. Lewington became the 19th Bears player this season to tally multiple points in a single game, and the seventh to score multiple goals in one game.

100% DJOOS:
Defender Christian Djoos added an assist on Lewington's overtime winning goal last night, earning Djoos the 100th point of his AHL career.  It was also Djoos' first point with the Bears since being reassigned to the Chocolate and White by the Washington on Jan. 11. The Swedish defender has collected 24 goals and 76 assists in his 159 career games with Hershey. He leads all Hershey defenders with 19 points (three goals, 16 assists) this season. Djoos was a 7th round selection of the Capitals in the 2012 NHL Draft.
O'BRIEN'S APPLES:
Hershey forward Liam O'Brien has assists in three straight games. The winger tallied two assists in last night's game, marking the 9th time in his AHL career he's posted a pair of helpers in a game, accomplishing this feat for the first time since Feb. 22, 2019 at Wilkes-Barre/Scranton. Last night was O'Brien's 350th career game with the Chocolate and White, and over his six seasons with Hershey, O'Brien has tallied 129 points (60 goals, 69 assists) to go along with 611 penalty minutes.