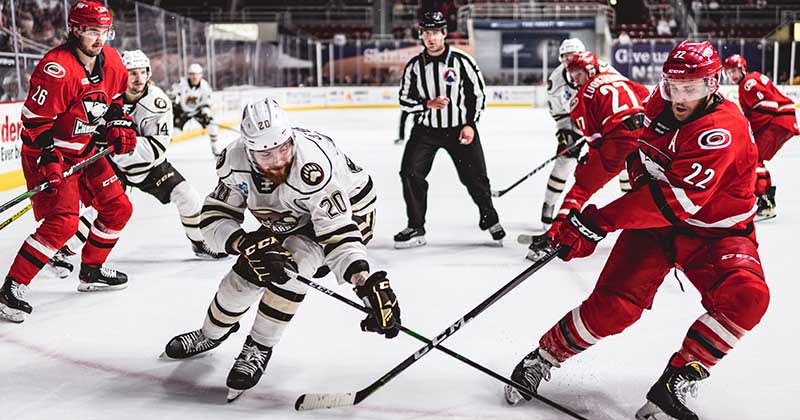 The Hershey Bears scored three times in the final period of regulation to mount a comeback attempt, but ultimately dropped a 5-4 decision to the Charlotte Checkers on Wednesday night at Bojangles' Coliseum. Hershey remains winless on Wednesday's this season, falling to 0-4-0-2 in midweek battles.
Charlotte opened the scoring with two late strikes in the final minutes of the opening period. At 17:19, Jake Bean scored after his center-point shot deflected off a maze of bodies through traffic, and into the cage behind Vitek Vanecek. The Checkers received another fortunate bounce after a Steven Lorentz shot rang the cross-bar, and the rebound sat perfectly for David Gust to bury into an open net at 19:39. Shots after 20 minutes were 10-8 Charlotte in addition to their 2-0 advantage.

The Bears showed early life in the 2nd period courtesy of a strong, individual effort by Garrett Pilon. In transition, Pilon pulled trigger from the slot and beat Checkers goaltender Alex Nedeljkovic low to the ice only 1:13 into the stanza. The Chocolate and White came within inches of tying the game at 2-2 after Matt Moulson hit iron on Hershey's lone man-advantage of the game. Midway through the period, Charlotte again salvaged momentum and hit pay-dirt. Gustav Forsling scored unassisted at 10:35 after Vanecek turned the puck over in the blue paint. Oliwer Kaski tallied on the power play at 12:09, and Lorentz added his 13th goal of the season at 18:14 to open Charlotte's lead to 5-1.

Late in the final period, Hershey began to surge and attempt a dramatic comeback. Brian Pinho snapped a shot past Nedeljkovic at 11:51 to bring his club within three goals. At 15:24, Eddie Wittchow threw a puck across the crease and received a fortunate deflection into the cage. The goal was originally credited to Matt Moulson, but switched to Wittchow for his second goal in consecutive nights. With Vanecek pulled in favor of the extra attacker with over three minutes remaining, Pinho immediately blasted home his second goal of the evening at 16:57 to suddenly bring Hershey within 5-4. Despite opportunities in the offensive zone late, the Chocolate and White were unable to find the equalizer, falling 5-4. Final shots on goal were 32-29 Charlotte. Hershey's penalty kill finished 3-for-4.

The Hershey Bears fall in back-to-back games for the first since since losing consecutively on Nov. 27 and Nov. 30 at Giant Center to the Providence Bruins and Belleville Senators. Hershey's record moves to 10 games above .500 at 23-13-2-3

The Bears return to action on Saturday, Jan. 18 against the Atlantic Division leading Hartford Wolf Pack. It's GIANT Food Drive night at Giant Center, where fans are encouraged to donate non-perishable food items to donate to the Central PA Food Bank. Fans making donations will be eligible to win a variety of Hershey Bears prizes, as well as GIANT Foods Gift Cards. Ticket information is available online at HersheyBears.com.