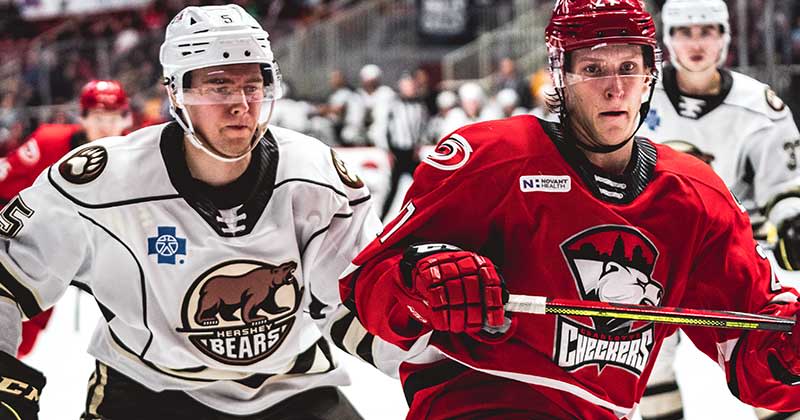 Eddie Wittchow scored for the Hershey Bears in the first period, but the Chocolate and White dropped a 4-1 decision to the Charlotte Checkers on Tuesday night at Bojangles' Coliseum. The loss snapped Hershey's five-game road winning streak and handed the Bears their first loss away from Giant Center since Nov. 24 in Providence.
The Bears were penalized only twice throughout regulation, but both minors occurred eight seconds apart in the opening stanza to provide Charlotte a lengthy 5-on-3. Brian Pinho was boxed for a tripping infraction at 13:00, and goaltender Pheonix Copley was called for high-sticking at 13:08, served by Philippe Maillet. On the two-man advantage, Oliwer Kaski unleashed a howitzer past Copley at 14:15 to open the scoring. Shots after 20 minutes were 15-6 Checkers in addition to their 1-0 advantage.

Kaski scored the eventual game-winning goal only 2:16 into the second period to double his team's lead. On the transition, Kaski fielded a drop pass from Janne Kuokkanen and sniped a shot into the top corner. Hershey surged late in the frame, and Eddie Wittchow capitalized for his third goal of the season. Working the puck low to high in the offensive zone, Wittchow stepped into a blast from the blue line to beat Charlotte goaltender Anton Forsberg, and cut Hershey's deficit in half. Shots after 40 minutes were 22-21 Charlotte with the Bears trailing by one.

The Bears earned their lone power play chance of the night at 4:23 of the third period after Max McCormick was whistled for slashing Tyler Lewington. Unable to convert on the man-advantage, Charlotte countered and tallied at 9:20 to restore a two-goal edge. On the transition once more, David Gust beat Copley top-shelf to open a 3-1 Charlotte advantage. Copley was pulled with over three minutes remaining in favor of the extra attacker, but Steven Lorentz hit the vacant net at 16:26 to complete a 4-1 final. Final shots on goal were 32-27 Checkers.

The Hershey Bears return to action tomorrow, Jan. 15 to close out back-to-back meetings against the Charlotte Checkers. Puck drop from Bojangles' Coliseum is scheduled for 7 PM. Voice of the Bears Zack Fisch will have the call on the Bears Radio Network.