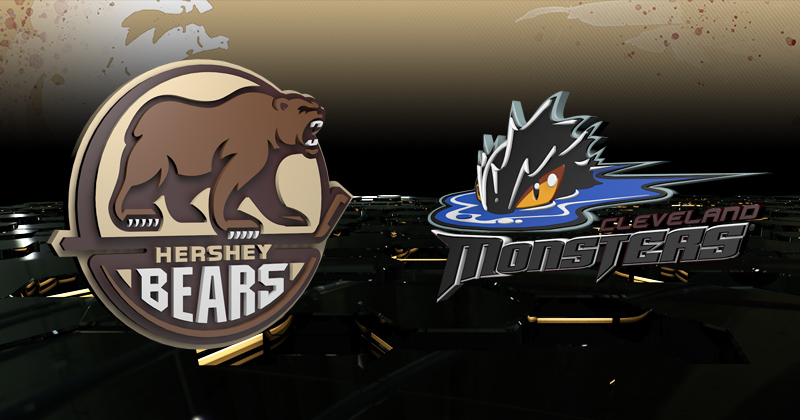 Tonight, the Hershey Bears play host to the Cleveland Monsters in a rematch of the 2016 Calder Cup Finals. It's the first of four meetings between the Bears and Monsters in 2019-20.

LAST TIME OUT:
The Hershey Bears return to the ice tonight after earning a 2-1 shootout victory last night at Wilkes-Barre/Scranton. The win was Hershey's fifth straight on the road. The Bears opened the scoring just 42 seconds into the second period. Liam O'Brien bumped a pass to a streaking Axel Jonsson-Fjallby, and the forward beat Wilkes-Barre/Scranton netminder Dustin Tokarski to give Hershey a 1-0 lead. The Penguins tied the game at 12:27 of the second period on a goal off the rush from Jamie Devane. That would be the only shot that would beat Hershey's Pheonix Copley all night. The netminder stopped 33 shots in regulation and overtime, then went a perfect 6-for-6 in the shootout. In the bottom of the 6th round of the skills competition, Shane Gersich scored the lone goal of the shootout, beating Tokarski through the five-hole. The Monsters were in action last night at Binghamton, falling 5-2. Calvin Thurkauf had a goal and an assist for Cleveland.

KEEPING IT 100:
Three Bears have hit milestones involving the number 100. In last night's victory, netminder Pheonix Copley earned his 100th professional victory. He has won 82 AHL games, 16 NHL games, and 2 ECHL games in his career. The netminder has won five straight contests and ranks 10th in the AHL with a 2.44 goals against average this season. Forward Beck Malenstyn played in his 100th professional game yesterday. He has tallied 23 points (11 goals, 22 assists) in 97 AHL games with Hershey and also skated in three NHL games with the Capitals this year. Last night's hero Shane Gersich is skating in his 100th professional game this evening.

EAVES RETURNS:
Former Hershey head coach Mike Eaves returns to Chocolatetown as a member of the visitors. Eaves, who is in his first year as head coach of Cleveland, coached the Bears for three seasons from 1990-93. He helped guide Hershey to two playoff appearances during his tenure, and finished with an all-time record 96-109-35. Eaves coached the NCAA's Wisconsin Badgers from 2002-16, helping Wisconsin win the NCAA title in 2006. During his tenure with the Badgers, he coached Hershey defenseman Eddie Wittchow from 2013-16. Eaves is also currently coaching a former Bear with the Monsters. Cleveland defender Steve Johnson appeared in nine games with Hershey last season, registering one assist.

REFILLING THE DJOOS:
Earlier this morning, the Washington Capitals announced that defender Christian Djoos had been re-assigned to the Hershey Bears. Djoos, 25, has 18 points (three goals, 15 assists) in 25 games with the Chocolate and White this season. The 2018 Stanley Cup Champion has also skated in a pair of games with Washington. The dynamic Djoos still ranks second on Hershey in assists despite not playing for the Bears since Dec. 21. The Gothenburg, Sweden native has 99 points (24 goals, 75 assists) in his 156 games in the AHL, all with Hershey.