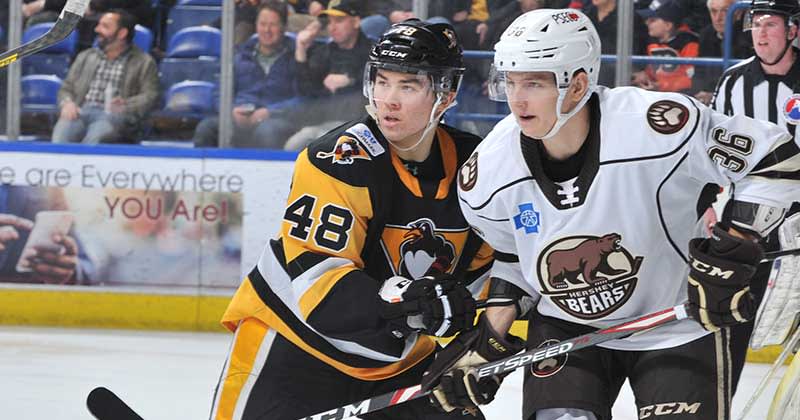 Pheonix Copley turned aside 33 of 34 shots, and Shane Gersich walked off the game with a shootout goal to lift the Hershey Bears to a 2-1 edge over the Wilkes-Barre/Scranton Penguins on Friday night. Copley's victory in net marked his 100th professional win. The Bears have now won five consecutive games away from Giant Center.
After a scoreless opening 20 minutes, both teams tallied their only goal of regulation in the 2nd period. In the frame's opening minute, Liam O'Brien feathered a perfect, head-man pass to Axel Jonsson-Fjallby, who buried his eighth goal of the season at :42. Wilkes-Barre/Scranton found the equalizer with Jamie Devane's second goal of the campaign at 12:27. Niclas Almari fed Devane on a cross-ice feed, and Devane beat Copley moving to his right along his blocker side.

Shots after 40 minutes were 21-12 Penguins. Hershey's penalty kill put forth a brilliant performance, going 5-for-5 on the evening, including a key, 4-on-3 kill in sudden-death overtime. Following a scoreless third period and sudden-death overtime, the game progressed to Hershey's fifth shootout of the season. Copley was perfect, going 6-for-6 on shooters, and Shane Gersich buried his shootout attempt five-hole on Dustin Tokarski to win the game for the Chocolate and White. Final shots on goal were 34-20 Penguins.

Hershey's record improved to 22-11-2-3 at the midway point of the 2019-20 regular season, and remain ranked 2nd in the Atlantic Division.

The Hershey Bears conclude their weekend tomorrow night at Giant Center against the Cleveland Monsters. The first 4,000 fans in attendance will receive a Hershey Bears themed Pepsi Keychain, courtesy of Pepsi. Ticket information is available online at HersheyBears.com.