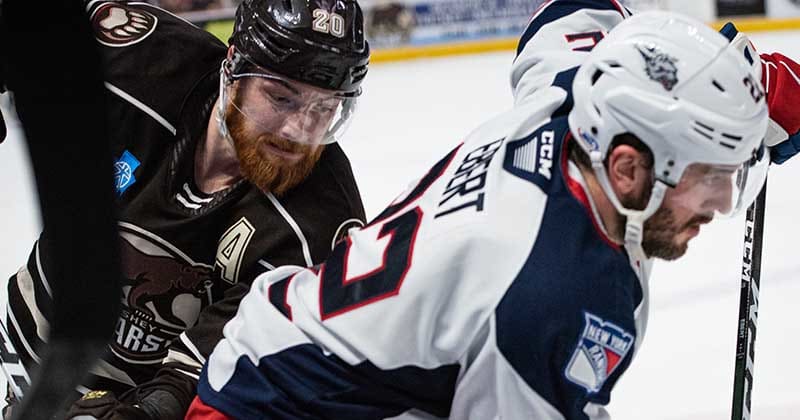 Vinni Lettieri scored in the final minute of regulation to lift the Hartford Wolf Pack past the Hershey Bears, 2-1 on Wednesday night at Giant Center. The result snapped the Bears' four-game winning streak and moved their overall record to 21-11-2-3.
Hartford tallied the lone goal in the first period at the 18:26 mark. Boo Nieves scored his fourth goal of the season after finishing a perfect pass across from Ryan Gropp. Shots after 20 minutes were 10-5 Hershey. Next period, the Chocolate and White flipped the script by tallying the only goal in the middle frame. On a power move to the net, Philippe Maillet extended his point streak to four games after burying a low shot past Wolf Pack goaltender Adam Huska at 15:59. Shots after 40 minutes were 17-11 Hershey.

Tied at 1-1, Vinni Lettieri beat Vitek Vanecek five-hole for the eventual game-winning goal in the final minute of regulation at 19:06. Final shots were 27-15 Bears. Hershey's special teams finished 0-for-1 on the power play and 3-for-3 on the penalty kill. Both teams are scheduled to rematch at Giant Center on Saturday, Jan. 18 at 7 PM.

The Hershey Bears return to action on Friday, Jan. 10 when they visit the Wilkes-Barre/Scranton Penguins for a 7:05 PM puck drop. Voice of the Bears Zack Fisch will have the call on the Bears Radio Network.