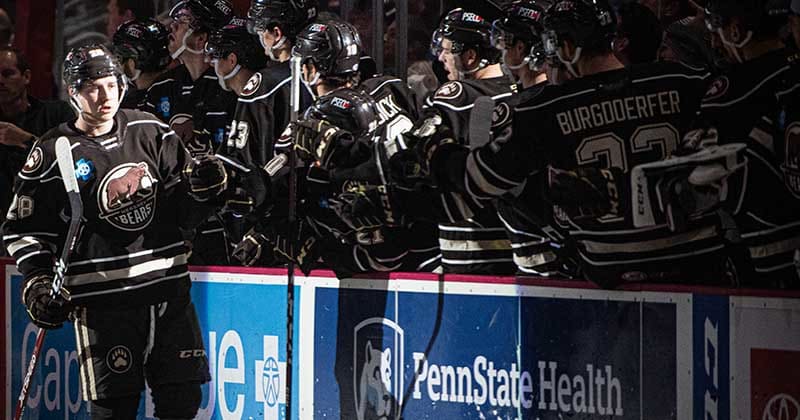 The Hershey Bears swept a back-to-back set against the Bridgeport Sound Tigers after winning, 4-2, on Sunday evening at Giant Center. The victory is Hershey's 13th win in their previous 14 games, and improve their record to 21-10-2-3.

Held to only two goals last night, the Chocolate and White tallied twice in the first period to jump in front, 2-0. First, Brian Pinho squeaked a shot through Bridgeport goaltender Jakub Skarek following a pass across the low-slot from Matt Moulson at 4:22. Later in the period, Garrett Pilon finished an offensive rush by wiring a shot into the cage at 16:14. Mike Sgarbossa recorded the primary assist for his 100th point as a member of the Bears. Shots after 20 minutes were 10-8 Hershey.

Next period, the Sound Tigers responded and converted on their first power play chance in over four periods. Sgarbossa was boxed for holding at 2:29, and Kieffer Bellows scored for the Sound Tigers at 4:23. Kody Clark answered for the Bears at 5:45, but Jeff Kubiak again cut Hershey's lead to one goal with a strike at 15:52. Shots after 40 minutes were even at 18 with the Chocolate and White leading 3-2. Clark's goal eventually stood as his first professional game-winning goal.

Protecting a one goal advantage late, Philippe Maillet sealed the scoring with an empty net goal at 19:28 to complete the scoring. Final shots on goal were 32-23 Bridgeport. Hershey's special teams finished 0-for-3 on the power play and 2-for-3 on the penalty kill.

The Hershey Bears return to the ice on Wednesday, Jan. 8, as they host the Atlantic Division leading Hartford Wolf Pack at Giant Center. It's Hersheypark Pass Night for all fans in attendance. Ticket information is available online at HersheyBears.com.