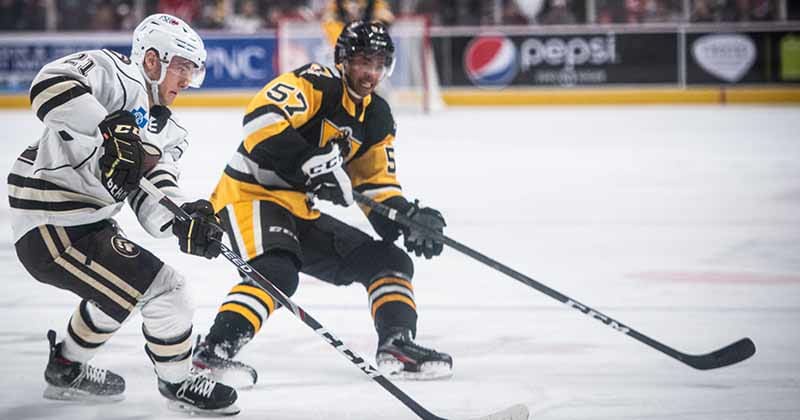 The Hershey Bears erased a 2-0 hole in the third period and rallied past the Wilkes-Barre/Scranton Penguins, 3-2 in overtime, on Sunday night at Giant Center. Joe Snively recorded his third game-winning goal in his professional career, and first to come in sudden-death overtime. The Bears improve their record to 12-9-2-3 after winning three straight one-goal games in three consecutive nights against in-state rivals.
Before the comeback, the Penguins tallied for two goals less than two minutes apart in the first period to grab an early 2-0 advantage. First, Sam Miletic scored his fifth of the season at 6:32 after moving laterally in the low-slot and beat Pheonix Copley moving to his left. At 8:16, Anthony Angello buried a feed from beneath of the goal line off Joseph Blandisi's tape, and past Copley's blocker side to double Wilkes-Barre/Scranton's advantage. Shots after 20 minutes were 9-7 Pens. Next period, the Bears tied a single period season-high with 18 shots on DeSmith, but he turned aside all to keep Hershey scoreless. The Pens held onto their 2-0 lead into the third period with shots 25-15 Bears after 40 minutes.

Next period, the Chocolate and White quickly flipped the script. Jamie Devane was boxed for hooking at 2:21, and the Bears needed only 14 seconds to hit pay-dirt on the ensuing power play. Matt Moulson tallied his seventh goal of the season courtesy of camping out at the net front and burying the rebound of a Bobby Nardella shot. At 8:45, Christian Djoos tied the game on a shot from the point for his third goal of the campaign.

The 2-2 game progressed into sudden-death overtime, and the Chocolate and White capitalized on another net front, second chance opportunity. Joe Snively forced a turnover along the half boards and fed Mike Sgarbossa in the middle. Sgarbossa's shot rang the goal post, but Snively raced to the loose puck and finished the rebound to win the game for Hershey.

Final shots on goal were 35-25 Bears. Hershey's special teams finished 1-for-3 on the power play, and a perfect 4-for-4 on the penalty kill to increase its current kill streak to 21. The Bears were previously 1-8-0-1 when trailing after 40 minutes entering Sunday.

The Hershey Bears return to action on Saturday, Dec. 14 against the Bridgeport Sound Tigers at Giant Center. It's Pennsylvania Lottery Night, as the first 4,000 fans at the arena will receive a coupon offer, courtesy of the Pennsylvania Lottery. Ticket information is available online at HersheyBears.com.