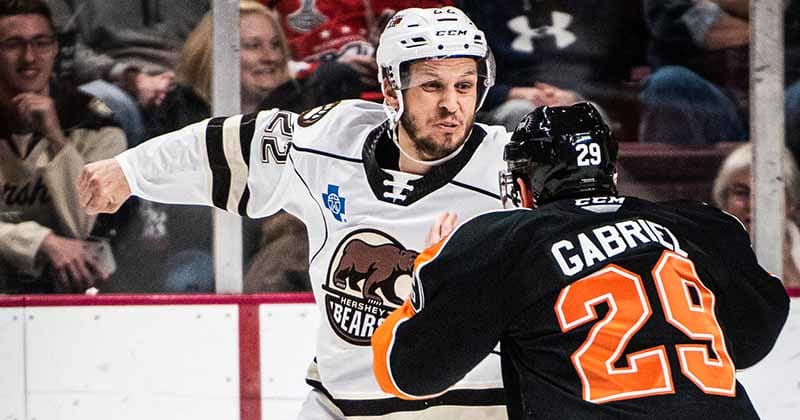 Vitek Vanecek turned aside 32 shots and posted his first shutout since Mar. 19 to lift the Hershey Bears to a home-and-home sweep over the Lehigh Valley Phantoms, winning 1-0 on Saturday night at Giant Center. Vanecek's 32 saves is a new single-game high for the 2019-20 season.

After a scoreless first period which saw Lehigh Valley lead in shots, 13-7, Mike Sgarbossa scored the game's only goal in the 2nd stanza. Issac Ratcliffe was given an extra two minutes for elbowing in addition to roughing minors assessed to himself and Tyler Lewington, and Sgarbossa capitalized on the ensuing power play. On a feed from Alexeyev, Sgarbossa scored his team-best ninth goal of the season on a snap shot past Phantoms goaltender J.F. Berube.

The Bears finished the night 1-for-4 on the power play, and 4-for-4 on the penalty kill to extend their current successful kill streak to 16. Final shots on goal finished 32-20. Both teams combined for 88 penalty minutes (49 Hershey, 39 Lehigh Valley) to mark the Bears most penalized game this season.

Kale Kessy totaled 31 penalty minutes, setting a new AHL career-high. His previous was 30 penalty minutes set on Nov. 21, 2014. Hershey's win marked their third consecutive victory for the first time this season to improve their record to 11-9-2-3.

The Hershey Bears return to action and look to sweep their three-in-three stretch tomorrow night against the Wilkes-Barre/Scranton Penguins at 5 PM. It's a Bear of a Discount Night, where all fans at Giant Center will receive 30% OFF Bear of a Shake, Dog and Burger. Ticket information is available online at HersheyBears.com.