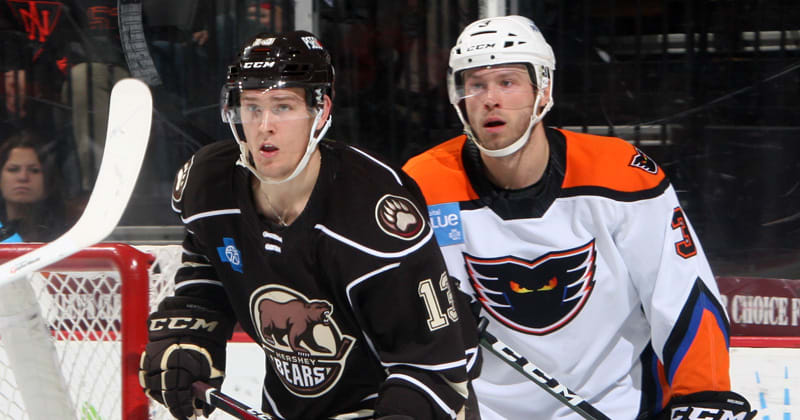 The Hershey Bears went a perfect 5-for-5 on the penalty kill, and killed a lengthy 5-on-3 power play late in the 2nd period to preserve a 2-1 victory over the Lehigh Valley Phantoms on Friday night at the PPL Center. The win snapped a seven-game road losing streak for the Chocolate and White, and pushed Hershey above the .500 mark.

Matt Moulson opened the scoring only 5:50 into the game after burying a lively rebound. Philippe Maillet tested Phantoms goaltender Alex Lyon from the slot, and Moulson was quick to pounce on a second chance opportunity from the netfront. Liam O'Brien recorded the secondary assist to extend his current point and assist streak to five consecutive games. At 18:41, Andy Welinski scored the equalizer after a backdoor chance glanced off Tyler Lewington's skate and behind Vitek Vanecek. The Hershey netminder finished the game denying 25 of 26 Lehigh Valley shots.

Next period, Joe Snively scored the frame's only goal and the eventual game-winner. On an offensive rush with Mike Sgarbossa, Snively joined the play as a trailer and snapped a shot past Lyon's glove hand at 14:11. Minutes later, the Bears penalty kill was tasked with a lengthy 5-on-3 challenge. Shane Gersich and Beck Malenstyn were penalized only 10 seconds apart after Gersich was flagged for delay of game, followed by Malenstyn called for an unsportsmanlike conduct. A successful kill of the two-man disadvantage kept the Bears leading after 40 minutes. Shots at intermission were 29-21 Hershey.

In the third, Hershey played shut down defensively and killed their fifth penalty after Malenstyn was called for checking to the head at 5:53. Vanecek turned aside five Phantoms shots in the final period to help his team to a 2-1 win. Final shots on goal were 37-26 Hershey. The Bears win their 10th game of the season to improve to 10-9-2-3 on the regular season.

The Hershey Bears return to action tomorrow to complete a home-and-home stretch against the Lehigh Valley Phantoms at Giant Center. It's Penn State Health Ornament Night for the first 5,000 fans upon arrival. Puck drop against the Phantoms is scheduled for 7 PM. Ticket information is available online at HersheyBears.com.