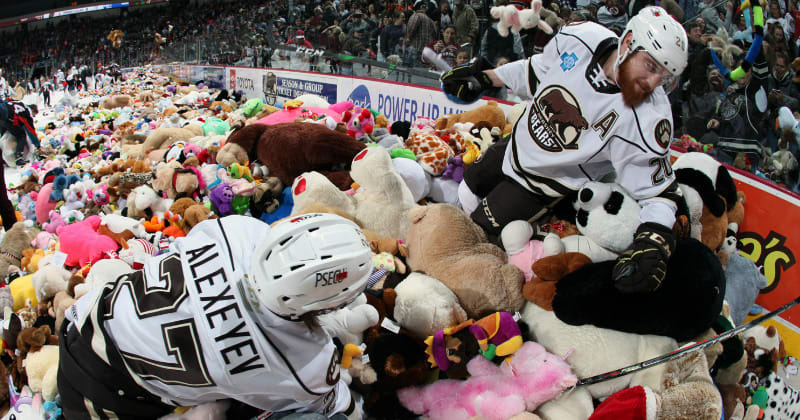 The Hershey Bears ended last week with a 4-3 victory over the Hartford Wolf Pack to end a four-game losing streak. The Chocolate and White have a 9-9-2-3 record through 23 games this season. The club plays three games versus Keystone State rivals this week. They’ll start the week looking to end a seven-game road losing streak at Lehigh Valley Friday before hosting the Phantoms on Saturday, and the Wilkes-Barre/Scranton Penguins on Sunday at Giant Center.

Last Wednesday, the Bears played in the club’s 65th all-time Thanksgiving Eve game, falling in a wild contest, 7-6 in a shootout, to Providence. The Bears led 3-0 and 5-3 in the game, but Providence earned the win on a Jakub Lauko shootout goal. Joe Snively had two goals and Garret Pilon posted three assists in the loss.

In last Saturday’s game, the Belleville Senators upended the Bears, 3-1, at Giant Center. Drake Batherson had three points for the B-Sens who used two power play goals in the second period to earn the victory.

#HersheyBearsCares
The Bears are committed to giving back to the local community. The club will deliver teddy bears to the Milton Hershey School, Vista School, and Hope Lodge this week, as well as visit Cocoa Packs.

TEDDY BEAR TOSS TRIUMPH: The Bears set a new world record, breaking the mark they established last season, by collecting a staggering 45,650 stuffed animals at last Sunday’s CommunityAid and abc27 Teddy Bear Toss. Defenseman Christian Djoos, assigned to Hershey by Washington earlier in the day, scored the goal that sent the bears flying at 8:11 of the first period. The record amount of teddy bears will be donated to around 40 charities for the holiday season.

BRETT’S BIG WINNER: In Sunday’s win, rookie forward Brett Leason enjoyed a breakout game. He notched his first professional goal, scoring the overtime winner in the 4-3 victory. He was the first Bear to have his first pro goal come in overtime since Colby Williams on Nov. 4, 2016 at Springfield. Leason also added two assists in the game, giving him the first multi-point game of his pro career. The 2019 2nd rounder of Washington has five points in 20 games this season.

ED, EDD n EDDIE: The Bears recalled defenseman Eddie Wittchow from South Carolina last week, and the 6-foot-4 blue liner made an immediate impact. The Minnesota native scored his first goal with the Bears in his Hershey debut, notching the opening tally in Saturday’s loss to Belleville. He followed up that performance with an assist on Beck Malenstyn’s goal in Sunday’s win over Hartford. Before his recall, Wittchow was named an assistant captain with the Stingrays and had seven points (three goals, four assists) in 15 ECHL games.

MAILLET HITS 100: In last Wednesday’s loss to Providence, forward Philippe Maillet notched a goal and an assist to earn his 99th and 100th professional points. The milestone also gave Maillet his first multi-point game as a member of the Chocolate and White. The Quebec native has scored 39 goals and added 61 assists in 162 AHL games with Ontario and Hershey.

BEARS BITES: Hershey has scored first in three straight games…Forward Kody Clark notched his first AHL point last Saturday, recording an assist on Eddie Wittchow’s first period goal…Forward Joe Snivley has points in five of his past six games, scoring six points (four goals, two assists) in that span…Hershey is still allowing the least shots per game in the league at an average of 26.09 per game…Nine of Hershey’s 10 remaining games in 2019 are versus the Atlantic Division while 14 of the next 15 games all feature divisional play…The Bears re-assigned forward Matt Weis to South Carolina Tuesday. He was held without a point in two games…Former Bear Chandler Stephenson was traded to Vegas by Washington on Monday for a 2021 5th round draft pick.