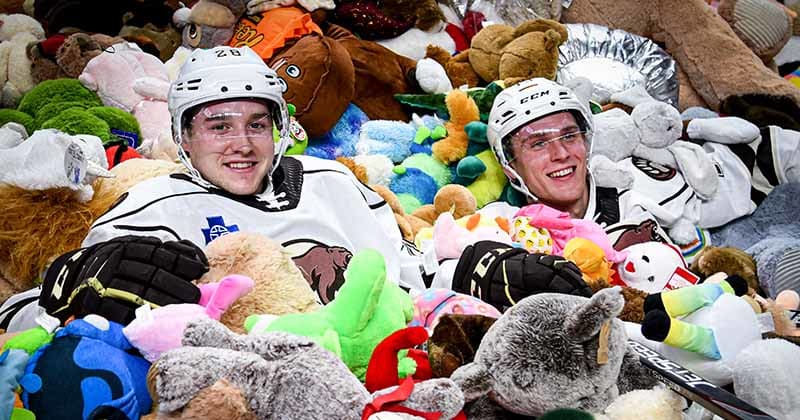 Teddy bears and stuffed animals were sent into orbit on Sunday night at Giant Center, as the Hershey Bears topped the Hartford Wolf Pack in overtime, 4-3. Rookie forward Brett Leason completed a three-point performance with a dramatic, overtime game-winning goal for his first pro goal to lift Hershey amid 45,650 stuffed animals.

Only 8:11 into the game, Christian Djoos proclaimed himself the 2019 Hershey Bears CommunityAid and abc27 Teddy Bear Toss goal scorer. On the rebound of a Joe Snively shot, Djoos crept into the low-slot and buried the second chance opportunity past Hartford goaltender Adam Huska to unleash 45,650 stuffed animals. Following a delay for ice cleanup, both teams returned to the ice and completed the opening stanza. Before both teams broke for first intermission, Steven Fogarty tied the game at 11:35 on a power play goal. Shots after 20 minutes were 12-6 Hershey.

Next period, Vincent LoVerde scored Hartford's second power play marker of the night at 7:37, but the Chocolate and White answered. At 15:16, Shane Gersich capitalized for his third goal of the season on the rebound of a Liam O'Brien shot past Huska. Shots after two periods were 22-16 Bears with the score even at intermission once more.

Into the third, Beck Malenstyn tallied a go-ahead marker to give his team their second lead of the evening. Malenstyn drove the net and found a loose biscuit in the low-slot, and completed the play for his fourth goal of the season at 5:08. Hartford tied the game late on Fogarty's second goal of the night while both teams skated 4-on-4 at 17:57. It set the stage for sudden-death overtime, and rookie forward Brett Leason seized the opportunity to complete a three-point night in dramatic fashion. At 2:21 of the extra frame, Djoos sent a head-man pass to Leason, who buried his own rebound sitting in the blue paint for his first professional goal and overtime winner.

The Hershey Bears finished the night leading in shots, 37-29. Special teams finished 0-for-5 on the power play and 7-for-9 on the penalty kill. The Bears improved their overall record to 9-9-2-3 with the overtime victory.

The Bears return to action on Friday, Dec. 6 with a 7:05 PM road visit to the Lehigh Valley Phantoms. Voice of the Bears Zack Fisch will have the call of the action from the PPL Center on the Bears Radio Network.