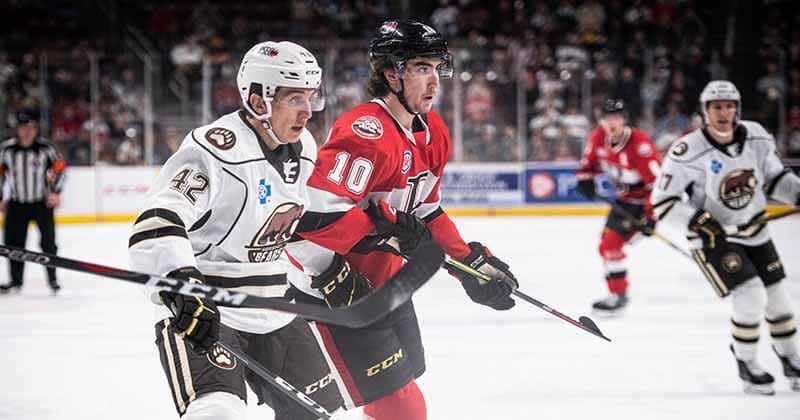 The Hershey Bears closed the month of November on the losing side of a 3-1 decision to the Belleville Senators on Saturday night at Giant Center. Kody Clark earned his professional point on Hershey's only goal of the game.

The Bears held Belleville to only one shot on goal in the opening stanza, and Eddie Wittchow put the Chocolate and White on the board in his Hershey debut. At 6:20, Liam O'Brien found Wittchow pinching from the left point with room, and fired a shot past Sens goaltender Joey Daccord for the period's lone marker. Kody Clark recorded the secondary assist on the goal for his first professional point. Shots after 20 minutes were 11-1 in favor of the Chocolate and White.

Belleville flipped the script in the 2nd period with two goals courtesy of their power play unit. O'Brien was assessed a five minute major for cross-checking and a game misconduct at 6:42, and the Sens drew even less than a minute later. Josh Norris ripped a shot into the cage, low to the ice past Vitek Vanecek at 7:38 to tie the game. Erik Burgdoerfer was sent to the sin-bin at 10:11 to put the Bears down 5-on-3, and the B-Sens went back to work and scored their second power play goal. Jordan Szwarz finished an easy, backdoor tap-in following a tape-to-tape pass from Sens top point producer, Drake Batherson at 11:09. Shots after two periods were 19-9 Hershey despite trailing 2-1.

The Chocolate and White were unable to find the equalizer in the 3rd period, and Drake Batherson completed the scoring with an empty net goal at 18:46. The Bears finished the night with a 27-16 advantage in shots. Special teams finished 0-for-2 on the power play, including a missed 5-on-3 chance, and 3-for-5 on the penalty kill. Hershey falls under .500 for the first time since Oct. 6, 2019 (0-1-1-0) with a current overall record of 8-9-2-3.

The Hershey Bears return to action and open the month of December tomorrow, Sunday, Dec. 1 at 5 PM versus the Hartford Wolf Pack. It's the CommunityAid and abc27 Teddy Bear Toss Night at Giant Center. Ticket information is available online at HersheyBears.com.