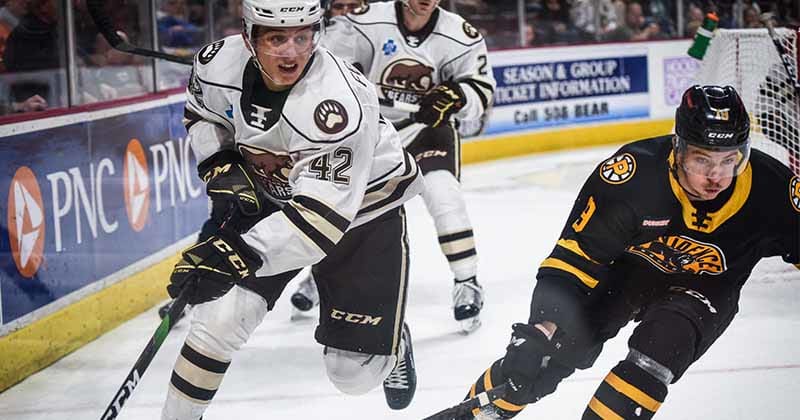 The Hershey Bears ran wild with a four-goal second period, including two in seven seconds, but dropped a 7-6 shootout decision to the Providence Bruins on Wednesday night at Giant Center. Garrett Pilon tallied three assists to tie a career-high in single-game points in the loss.

Mike Sgarbossa began the scoring affair at 11:45 of the first period on Hershey's second power play chance of the night. Matt Moulson deflected a pass from the low-slot to the far circle for Sgarbossa, who buried his team-leading eighth goal of the season. Hershey led 1-0 at first intermission with shots even at 8-8.

Next period, the Bears scored two goals in the stanza's opening minute to take a 3-0 advantage. Brian Pinho missed on a penalty shot in the first period, but sought redemption by burying a breakaway chance at :52 past Bruins goaltender Max Lagace. Only seven seconds later, Joe Snively scored on a backdoor feed from Pilon and Alex Alexeyev.

Providence began mounting their comeback attempt with two goals under a minute apart to cut Hershey's advantage to 3-2. Brendan Woods scored his second of the season, and second against the Chocolate and White at 5:13 after beating Pheonix Copley blocker side from point-blank range. At 6:06, Joona Koppanen capitalized from a sharp angle on Copley.

Both teams continued to trade blows in the second period. Erik Burgdoerfer scoring on a blast from the point at 7:21, and the Bruins again pulled within one goal moments later on a Urho Vaakanainen marker at 10:36. Philippe Maillet scored his third of the season at 12:33 to put the Chocolate and White ahead, 5-3, going into the third period. Maillet's tally assisted by Liam O'Brien and Tyler Lewington stood as his 100th professional, all-AHL point.

Into the third period, the P-Bruins quickly mounted their comeback attempt with three unanswered goals. Paul Carey brought the score to 5-4, scoring at 2:41, and Jakub Lauko tied the game at 10:34. Only 23 seconds later, Providence grabbed their first lead of the night with an Oskar Steen goal at 10:57. Trailing late in the game, Snively scored his fifth of the season and second of the night at 16:06 to tie the game at 6-6.

Sudden-death overtime loomed with sixes across the board, and the tilt eventually progressed to a shootout. Sgarbossa scored in the second round, but Robert Lantosi and Jakub Lauko both tallied for Providence to provide them a 2-1 shootout edge and 7-6 win. Final shots on goal were 28-23 Bruins. Hershey's power play finished the night 1-for-4 and 1-for-2 on the penalty kill. The Bears record moves to 8-8-2-3 with the shootout loss.

The Hershey Bears return to action on Saturday, Nov. 30 against the Belleville Senators. Puck drop at Giant Center is scheduled for 7 PM. Ticket information is available online at HersheyBears.com.