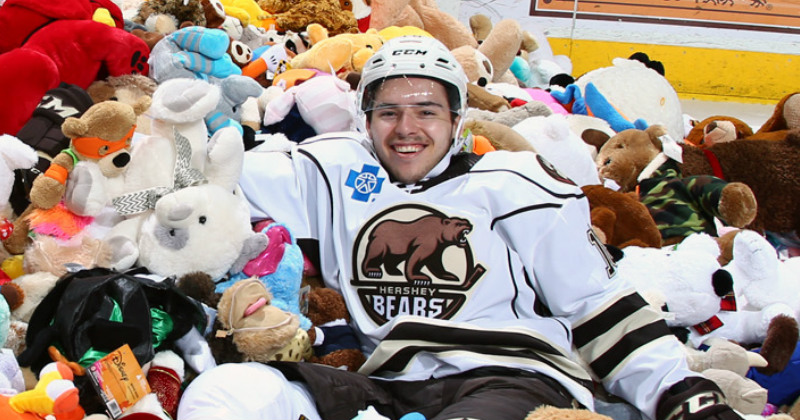 Our Teddy Bear Toss is Sunday! Check Out Our FAQ's

What is the CommunityAid and abc27 Teddy Bear Toss?
In a sight that truly must be seen, thousands upon thousands of stuffed animals will come raining down on Sunday evening at Giant Center. The Bears take the ice to battle the Hartford Wolf Pack that evening at 5 p.m., and this world-famous event sees fans throw teddy bears and other stuffed animals onto the ice following the team's first goal of the game. Last year the Bears set the WORLD RECORD for the Teddy Bear Toss, collecting 34,798 teddy bears.

How can I get tickets?
Tickets are going fast, so score yours now at the Giant Center Box Office or via Ticketmaster.

Who does the CommunityAid and abc27 Teddy Bear Toss benefit?
This event helps children in need during the holiday season. All teddy bears and stuffed animals are collected and donated to approximately 40 local charities, including schools, food banks, churches, lions clubs, as well as the Milton Hershey School, Children's Miracle Network, and the American Cancer Society. CommunityAid will make a donation of 25 cents per stuffed animal collected, up to $15,000, to benefit the Children's Miracle Network. We’re also excited to announce that for the 5th year in a row, Season Ticket Holder Jeff Sweigart, on behalf of the Sweigart Family Foundation, will once again be donating $1 per item collected to Children’s Miracle Network!

While we encourage fans to throw all teddy bears onto the ice, if you have too many to bring into the arena with you, there will be a collection truck outside of the Giant Center accepting donations from 3-5 p.m. on the day of the game.

I cannot attend the CommunityAid and abc27 Teddy Bear Toss. Can I bring a donation on another day?
Unfortunately we can only accept donations on the day of the game.