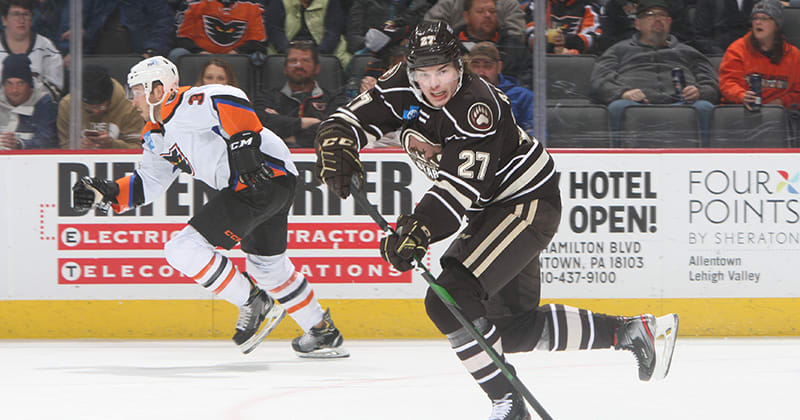 Phantoms Down Bears in Overtime, 3-2

The Hershey Bears visited the Lehigh Valley Phantoms on Saturday night in the first game of a home-and-home series, and dropped a hard-fought 3-2 overtime decision at the PPL Center.

The Bears opened the game strong with several chances on Phantoms goaltender Alex Lyon immediately after the opening faceoff. Hershey was credited for the first eight shots of the night, but Lehigh Valley scored on their very first opportunity. Isaac Ratcliffe was whistled for cross-checking at 4:34 to provide the Bears their first power play of the night, but Mikhail Vorobyev scored shorthanded at 6:28. Intercepting a Joe Snively pass in the neutral zone, Vorobyev was off to the races on a breakaway and beat Pheonix Copley on a forehand-backhand move. Shots after 20 minutes were 12-9 Hershey with the Bears trailing by a goal.

Next period, the Chocolate and White claimed the momentum after Kale Kessy fought Kurtis Gabriel at 3:43. The fighting major for Kessy helped him surpass 1,000 career penalty minutes in his professional career. Only seven seconds later, Matt Moulson tied the score for Hershey after lifting a shot up and over Alex Lyon at the net front. At 7:54, Hershey grabbed their first lead of the night courtesy of a fortunate bounce. Liam O'Brien received credit for an unassisted goal after wiring a puck around the glass, which hit a stanchion, deflected near the net, hit Lyon's goalie mask, and ricocheted into the net.  Before the period expired, Greg Carey found the equalizer with a 5-on-3 power play goal at 19:16.

Both teams battled in a scoreless third period, and the game progressed into sudden-death overtime. In the 3-on-3 display,  Andy Welinski scored the overtime winner for Lehigh Valley at 4:28. Final shots on goal finished 32-30 Lehigh Valley. The Bears finished the night 0-for-5 on the power play and 3-for-4 on the penalty kill. Hershey's overall record shifts to 6-5-2-1 in the overtime loss.

The Hershey Bears return to action tomorrow, Nov. 10 for a 5 PM puck drop at Giant Center. It's Hometown Heroes Night and United Brotherhood of Carpenters Local 431 Stick Flag Night, as the Bears conclude a home-and-home set against the Phantoms.