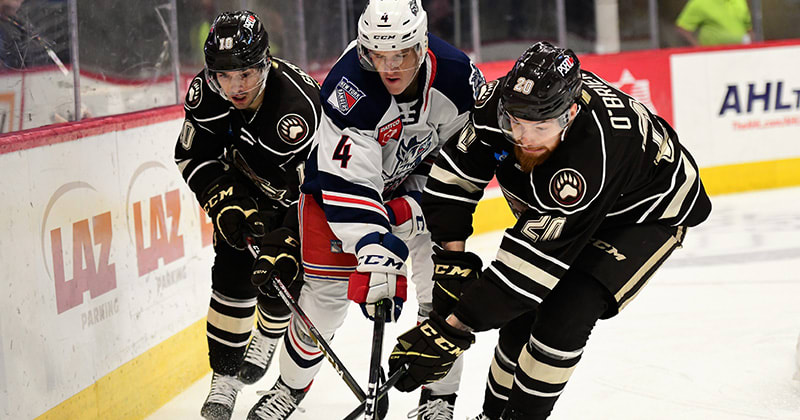 The Hershey Bears started their weekend set of games dropping a 2-1 decision to the Atlantic Division leading Hartford Wolf Pack on Friday night at the XL Center. Vitek Vanecek stood tall in goal and stopped 25 of 27 shots in the losing effort.

After a scoreless first period, both teams traded a goal each in the middle frame. Mike Sgarbossa opened the scoring for the Chocolate and White at 7:22 for his team-leading sixth goal of the season. Following a successful penalty kill, Brett Leason exited his defensive zone and moved the puck up ice. Christian Djoos sent a shot towards the frame from the left point, and Sgarbossa redirected the puck in front of Hartford goaltender Igor Shesterkin. In the final minute of the period, the Wolf Pack found the equalizer. Seconds following a face-off win to the right of  Vanecek, Steven Fogarty buried a backdoor feed from Joey Keane. Shots after 40 minutes were 18-15 Hartford.

Only 22 seconds into the third period, Darren Raddysh scored the eventual game-winning goal for the Pack. On a low to high play, Fogarty sent a shot from the right point that was tipped in front by Raddysh and into the net. Despite pulling Vanecek late in favor of the extra attacker, the Chocolate and White were unable to draw even before time expired. Final shots on goal were 25-23 Hartford. Bears special teams finished the night 0-for-1 on the power play and 3-for-3 on the penalty kill.

The Hershey Bears return to action tomorrow, Nov. 9 for a 7:05 PM puck drop against the Lehigh Valley Phantoms at the PPL Center. Voice of the Bears Zack Fisch will have the call on the Bears Radio Network with pregame beginning at 6:35.