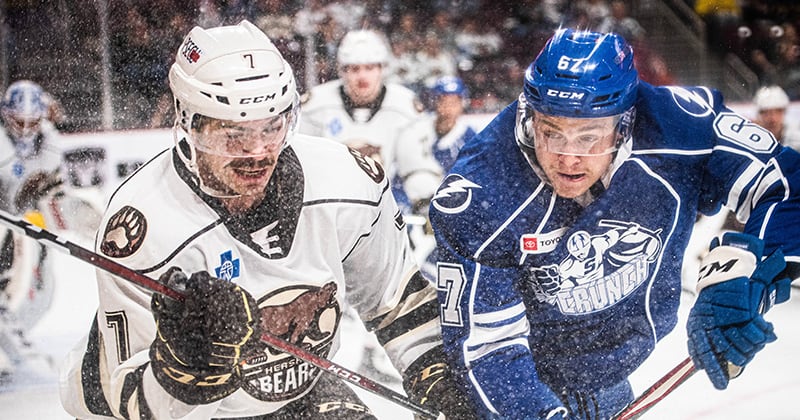 The Hershey Bears concluded a three games in three nights stretch on a winning note with a 4-2 victory over the Syracuse Crunch on Sunday night at Giant Center. The Bears improve their overall record to 6-4-1-1 after taking two of three games over the weekend.

For the second consecutive night, the Chocolate and White drew first blood. One second after a minor penalty assessed to Taylor Raddysh expired, Matt Moulson redirected a feed from Mike Sgarbossa at the net front at the 5:32 mark. Bobby Nardella earned the secondary assist for his third helper in two games.

Danick Martel brought Syracuse even at 15:54 after beating Pheonix Copley low-glove side, but Moulson again responded. After a perfect pass from Chris McCarthy beneath the goal line, Moulson fired a quick release past Spencer Martin to reclaim Hershey's lead at 18:01. After 20 minutes, the Bears possessed a 2-1 lead, as well as a 10-6 advantage in shots.

Next period, Beck Malenstyn scored the lone goal in the middle stanza, which later stood as the game-winner. On the rebound of a Martin Fehervary shot, Malenstyn bounced on the puck and scored his third goal of the season at the 4:53 mark. Christian Djoos recorded an assist on the play for his team-leading eighth of the season.

In the third period, Cory Conacher brought Syracuse within one goal after a shot snuck through Copley and rolled across the line at 11:37. But in the final second, Sgarbossa beat the buzzer with an empty net goal from over 100 feet out to round out a 4-2 final. Special teams finished 0-for-4 on the power play and 3-for-3 on the penalty kill for the Bears. Final shots were 24-20 Hershey.

The Hershey Bears return to action on Friday, Nov. 8 on the road against the Hartford Wolf Pack. Hershey will kickoff another three games in three nights stretch with a Friday tilt in Hartford, followed by a home-and-home stretch against the Lehigh Valley Phantoms. Puck drop on Friday against the Wolf Pack is scheduled for 7:15 PM. Voice of the Bears Zack Fisch will have the call on the Bears Radio Network.