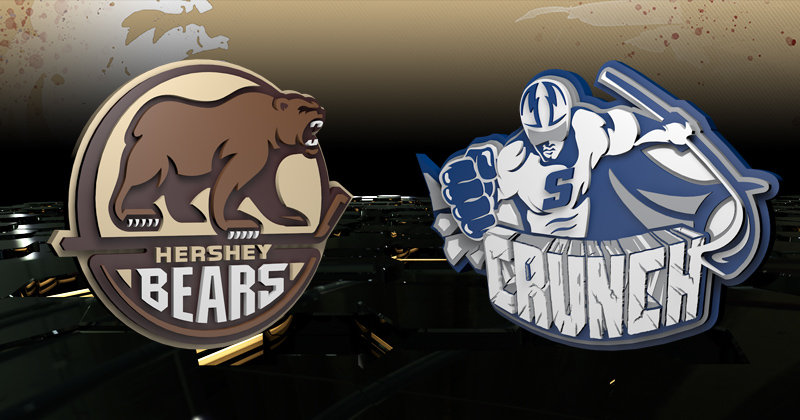 Tonight, the Hershey Bears conclude three games in three nights with a 5 PM puck drop against the Syracuse Crunch. The Bears are 62-42-11-5-4 (W-L-T-OT-SOL) all-time in the regular season against Syracuse dating back to the 1994-95 season.

LAST TIME OUT:
The Bears close the weekend tonight after claiming a 5-3 victory over the Providence Bruins last night at Giant Center. Hershey got goals from five different players, and went a perfect 6-for-6 on the penalty kill, while also adding a league-leading fourth shorthanded goal of the season. Both Shane Gerisch and Martin Fehervary posted a goal and an assist for Hershey, and Vitek Vanecek turned aside 20 shots. Syracuse also earned a victory yesterday, topping Binghamton 3-2 on home ice. The Crunch got power play goals from Chris Mueller, Alex Barre-Boulet, and Otto Somppi in the win, and went 7-for-7 on the penalty kill. Netminder Scott Wedgewood stopped 25 shots to earn the victory.

FEELS LIKE THE FIRST TIME:
Last night's victory featured many firsts. Defenseman Bobby Nardella collected a pair of assists, recording the first professional points of his career. Three players for Hershey also earned their first goal of the season last night. Defenseman Erik Burgdoerfer, as well as forwards Shane Gersich and Garrett Pilon all struck for the first time this year in the victory. Gersich's goal was also the first shorthanded marker of his career.

LAST SEASON VERSUS SYRACUSE:
The Bears and Crunch met twice last season with Syracuse winning each contest. The two clubs played on the opening night of the 2017-18 campaign as Syracuse earned a 3-2 victory at Giant Center on Oct. 6, 2018. Liam O'Brien and Mike Sgarbossa scored for Hershey, but Alex Barre-Boulet's first professional goal turned out to be the game-winning marker in that contest. The two teams last met on Nov. 11, 2018 as the Crunch skated past the Bears, 7-2, at the Onondaga County War Memorial Arena. Current Syracuse forward Taylor Raddysh was the first star with a goal and an assist for the Crunch.

DENYING DANICK:
Syracuse's roster features forward Danick Martel, who has collected two goals in seven games so far this season. Martel is a familiar foe to Bears fans after spending parts of three seasons with the Lehigh Valley Phantoms. The Quebec born forward had 11 points (five goals, six assists) in nine games versus Hershey during the 2017-18 campaign, including tallying a hat trick on the opening night of the season on Oct. 7, 2017 at Lehigh Valley. He was claimed on waivers by the Tampa Bay Lighting on Sept. 22, 2018 and played nine NHL games last year.