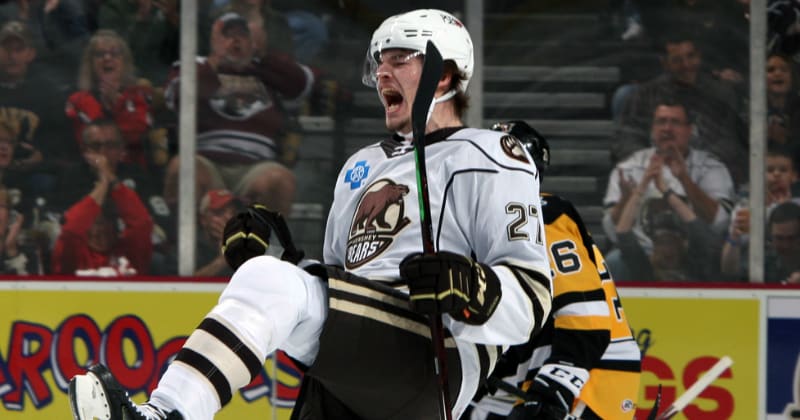 CLICK HERE TO VIEW THE HERSHEY BEARS WEEKLY RELEASE #1
The 82nd season of Hershey Bears hockey opened this past weekend. Hershey’s roster for the 2019-20 campaign features a mix of returning players, top Washington Capitals draft picks, and a group of veteran players to help lead the way. Under the direction of second-year head coach Spencer Carbery, the Bears will follow-up a season that saw them post a 17-game point streak and go from last place in the AHL to a playoff position.

On Sunday, Hershey dropped a 2-1 overtime decision to the Providence Bruins. Ryan Fitzgerald opened the scoring for Providence at 14:31 of the first period. Hershey’s Mike Sgarbossa responded to tie the game at 10:26 of the second stanza, capitalizing on a Providence turnover. Despite several late power play attempts, Hershey was unable to pull ahead, and the Bruins eventually won the game at 3:59 of overtime on Brendan Gaunce’s second goal of the season. Hershey netminder Pheonix Copley took the loss with 22 saves.

#HersheyBearsCares
The Bears are committed to giving back to the local community. On Tuesday, players visited the Penn State Children’s Hospital. On Wednesday, Oct. 9, players Kody Clark, Beck Malenstyn, Garrett Pilon, and Riley Sutter will visit ZooAmerica from 2-4 p.m. The Bears players will meet ZooAmerica’s bears for a Halloween activity.

ROCKING THE “A’s”: Head coach Spencer Carbery has named his leadership group to start the 2019-20 season. To open the campaign, forward Liam O’Brien and defender Erik Burgdoerfer will serve as alternate captains on home ice. On the road, forwards Matt Moulson and Mike Sgarbossa will have the same honor. Both O’Brien and Sgarbossa were part of Hershey’s leadership group last season, while Burgdoerfer was the captain of the Belleville Senators and Moulson was an alternate captain for the Ontario Reign.

MATTY ICE: Forward Matt Moulson made his Hershey debut this weekend, and the former 30-goal scorer in the NHL made quite the first impression. Moulson scored a power play tally in Saturday’s loss to Wilkes-Barre/Scranton and provided the primary assist on Mike Sgarbossa’s goal in Sunday’s contest. Moulson signed a one-year, AHL deal with Hershey after scoring 62 points, including 14 power play goals, last year for the AHL’s Ontario Reign.

ALEX’S AMAZING DEBUT: It didn’t take long for Washington Capitals prospect Alex Alexeyev to make an impact at the pro level. The 2018 1st round draft choice scored just 1:02 into his professional debut on Saturday. Alexeyev’s goal came on his first professional shot, and it was also Hershey’s first shot of the season. The defender was selected 31st overall in 2018 and compiled 43 points in 49 games last year for Red Deer (WHL).

DJOOS BAR: A surprise addition to Hershey’s roster was defenseman Christian Djoos who rejoined the Chocolate and White after clearing waivers and being loaned by Washington. Djoos, who scored 58 points from the blue line in 2016-17 for the Bears, quickly added his first goal of the season, striking in the first period of Hershey’s loss to Wilkes-Barre/Scranton on Saturday.

BOYDER’S BACK: The Washington Capitals assigned forward Travis Boyd to Hershey on Monday. Boyd was Hershey’s Team MVP in the 2016-17 and 2017-18 campaigns. He was a 2017 AHL All-Star in a year he collected 63 points for the Chocolate and White. Boyd, who scored 20 points in 53 games last year with the Capitals, has 166 points in 217 career AHL games with Hershey.

600 ON TAP FOR BURGY: Hershey defender Erik Burgdoerfer is set to skate in his 600th professional game this weekend. The defender has played in 319 AHL games, 272 ECHL games, and eight NHL games. He returned to Hershey this season on an AHL deal after skating for the Bears from 2014-16, helping the team to the Calder Cup Finals in 2016.