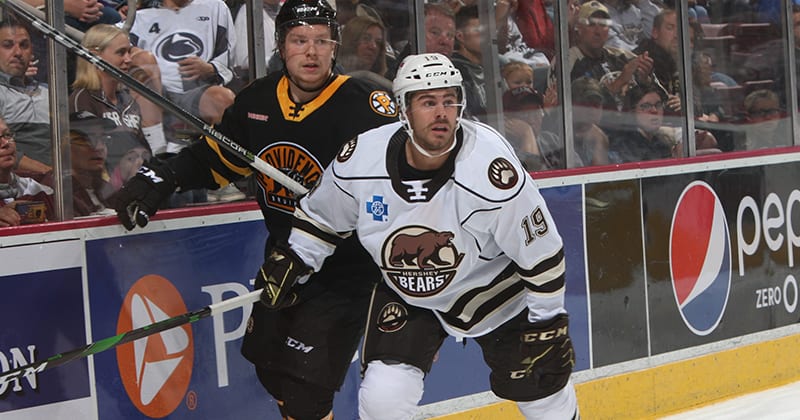 The Hershey Bears concluded their first weekend set of the 2019-20 regular season with a 2-1 overtime loss to the Providence Bruins on Sunday night at Giant Center. Pheonix Copley stopped 22 of 24 shots to help the Bears earn their first standings point of the season.

Hershey out shot Providence in the first period, 12-4, but trailed 1-0 at first intermission. Bruins goaltender Dan Vladar was perfect in net early, and stonewalled several key chances for the Chocolate and White. Following early stops by Vladar, the Bruins scored first at the 14:31 mark following a defensive zone turnover. Ryan Fitzgerald beat Bears goaltender Pheonix Copley with a snipe along the glove-side from the slot area to open the scoring.

A special teams dominated middle period followed, and Hershey drew even before second intermission. The Bears penalty kill went a perfect 4-for-4 in the period, including an abbreviated 5-on-3 kill to keep within one. Hershey was granted a 5-on-3 power play of their own after Brendan Gaunce was called for hooking at 7:36, followed by a Zach Senyshyn tripping minor at 8:26. Immediately as Senyshyn was freed from the sin-bin, Mike Sgarbossa tallied to even the score at 10:26. Off a giveaway, Shane Gersich setup Sgarbossa for the easy tap-in into an open net. Shots after 40 minutes were 19-15 Hershey.

The game remained tied 1-1 heading into sudden-death overtime. After the Bears were unable to convert on late power plays including a chance in overtime on the man-advantage, the Bruins countered on a rush and scored the game-winner. Gaunce poked a loose puck past Copley after the initial save was made to win the game at 3:59. Hershey's record with the defeat moved to 0-1-1-0. Final shots were 24-22 Providence.

The Hershey Bears return to action on Saturday, Oct. 12 against the Lehigh Valley Phantoms. Puck drop from PPL Center in Allentown is scheduled for 7:05 PM. Voice of the Bears Zack Fisch will have the call of the action on the Bears Radio Network beginning at 6:35 PM.