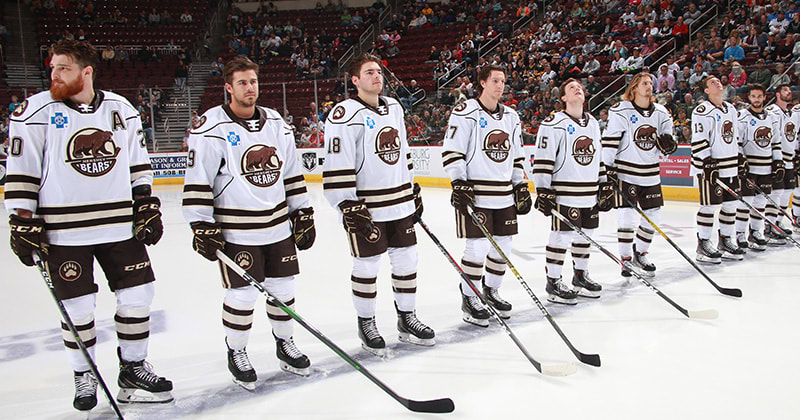 The Hershey Bears opened the 2019-20 regular season on Saturday night at Giant Center and dropped a tight 4-3 decision to the Wilkes-Barre/Scranton Penguins. Both teams rematch for their second of 12 meetings in the season-series on Oct. 13 in Hershey.

It took only 62 seconds for the Chocolate and White to score their first goal of the season, and it came at the hands of a rookie defender. In his professional debut, Alex Alexeyev received a cross-ice pass from Garrett Pilon, and sniped a shot low to the ice past Penguins goaltender Casey DeSmith for the personal milestone. Alexeyev was selected by the Washington Capitals in the 1st round, 31st overall in the 2018 NHL Draft.

Wilkes-Barre/Scranton added a pair of first period tallies to flip the score into a 2-1 Bears deficit. At 6:45, Jake Lucchini beat Vitek Vanecek moving to his right on a loose puck from the low-slot for the equalizer. Less than six minutes later, Stefan Noesen gave Wilkes-Barre/Scranton their first lead after burying a transition play following a pass feathered across the ice from Adam Johnson at 13:36. The Chocolate and White answered to tie the game at 2-2 on another goal from the Bears blue line. Christian Djoos beat DeSmith at 15:35 with a snipe from the left face-off circle to knot the game at 2-2 prior to first intermission. Shots after 20 minutes were 14-9 Penguins.

Into the second period, Noesen added his second goal of the night for the frame's only tally. Moments after a face-off to the right of Vanecek, Noesen chipped home a loose biscuit from the goal mouth to put Wilkes-Barre/Scranton back in front. DeSmith stopped all 15 Hershey shots in the period to keep the Penguins in front, 3-2, at second intermission.

In the third period, an early stanza insurance marker for Wilkes-Barre/Scranton later stood as the game-winning goal. Seconds after a successful Pens penalty kill, Anthony Angello raced out of the penalty box and beat Vanecek streaking to the net at 4:20. Down 4-2 in the later stages, the Bears were granted a power play chance at 17:15, and pulled Vanecek for the 6-on-4 power play. On the man-advantage, Matt Moulson scored his first goal as a Bear on a net front tap in at 18:41. Despite a late series of chances, the Penguins hung on to win 4-3 over the Bears on Opening Night.

The Hershey Bears return to action on Sunday, Oct. 6 against the Providence Bruins at 5 PM. It's Hersheypark Pass Night at Giant Center, where all fans will receive a Hersheypark Pass, valid for one-day admission through July 31, 2020. Ticket information is available online at HersheyBears.com.