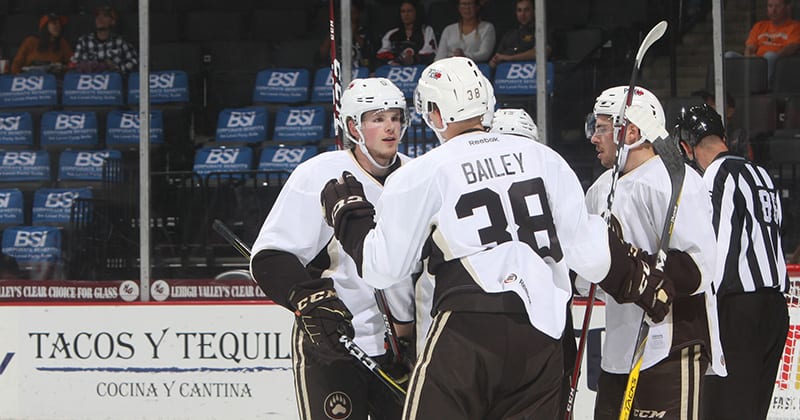 The Hershey Bears concluded their preseason schedule with a 2-0 shutout victory on Monday night over the Lehigh Valley Phantoms at the PPL Center in Allentown. Vitek Vanecek stood tall in goal for the Bears, and stopped all 27 shots faced to record the clean sheet. The Bears finish their three-game preseason schedule with a 2-1-0-0 record heading into Opening Night on October 5.

For the first time in three preseason games, the Bears tallied in the opening period to draw first blood. Following a set play on an offensive zone face-off, Colby Williams found Joe Snively, who ripped a shot past Phantoms netminder Felix Sandstrom at 14:53. Shots after 20 minutes were 9-4 Hershey, with the Chocolate and White leading at the first break.

Into the second period, Hershey converted on a crisp passing play at the net front to double their lead. Snively picked up the secondary helper for his second point of the night after setting up Penn State product Casey Bailey for a tap in near the goal mouth at 5:47. On the goal, Garrett Pilon earned his second assist of the night, and third of the preseason. Vanecek remained perfect in goal, stopping all 15 shots faced through 40 minutes, before adding an additional 11 saves in the third period for a 27 save total. The Bears finished the night 0-for-3 on the power play and 3-for-3 on the penalty kill.

The Hershey Bears and Lehigh Valley Phantoms will battle 12 times during the 2019-20 regular season, with the first meeting on October 12 at Lehigh Valley.