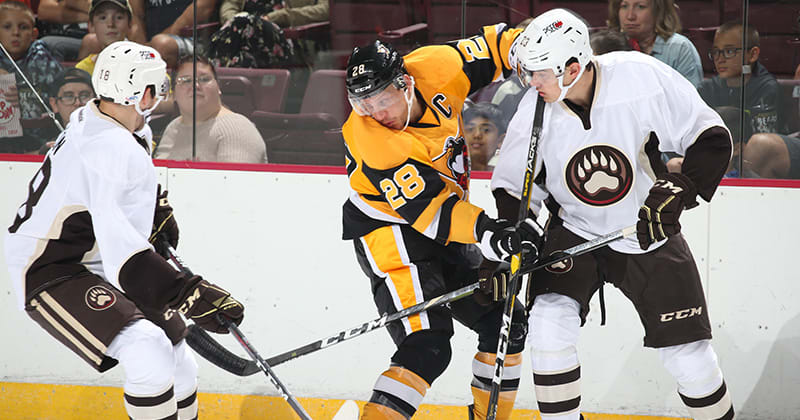 The Hershey Bears came from behind after trailing at second intermission to top the Wilkes-Barre/Scranton Penguins in overtime, 2-1, on Saturday night at Giant Center in their only home preseason game. Parker Milner stopped 28 of 29 shots in net for the Bears.

After a scoreless opening frame, the Penguins drew first blood in the final moments of the second period. On a sharp angle shot at 19:50, Kasper Bjorkqvist beat Milner short-side and low to the ice. Shots after 40 minutes were even at 18-18, with the Bears 0-for-2 on the power play and 3-for-3 on the penalty kill.

Into the third period, the Bears were tasked with an early penalty kill after Eddie Wittchow was flagged for high-sticking at 1:50. Seconds after Hershey's fourth successful penalty kill, Bobby Nardella hit the goal post on an offensive rush from the right face-off circle to bring the Chocolate and White within inches of tying the game. The Bears were granted their third power play chance at 7:36 after Brandon Hawkins was boxed for cross-checking. Hershey countered and converted on the power play for their first goal of the preseason. Matt Moulson redirected a shot from the low-slot past Penguins goaltender Alex D'Orio at 7:56.

The Bears faced two more chances on the man-advantage in the third period, and finished the night 1-for-5 on the power play. Sudden-death overtime was required for both teams in a 1-1 preseason deadlock. After Wilkes-Barre/Scranton possessed the puck to start the overtime period, Hershey seized their opportunity to win the game at 2:56. Garrett Pilon feathered a head-man pass to Axel Jonsson-Fjallby, who scored the overtime game-winner to complete a 2-1 comeback win for the Chocolate and White.

The Hershey Bears hit the road to complete their three-game, preseason schedule on Monday night. The Bears will travel to Lehigh Valley to battle the Phantoms at 7:05 PM from the PPL Center in Allentown.