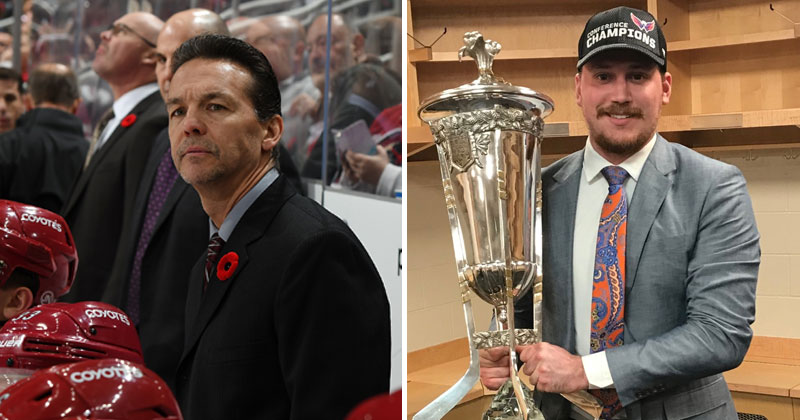 The Hershey Bears announced today a pair of additions to Spencer Carbery's coaching staff. The club has named Scott Allen assistant coach, and Jared Elenberger has been hired as video coach. The announcements were made by Hershey's vice president of hockey operations Bryan Helmer, and Brian MacLellan, senior vice president and general manager of Hershey's National Hockey League affiliate, the Washington Capitals.

Allen, 53, brings over 20 years coaching experience to Hershey. He joins the Chocolate and White from the NHL's Arizona Coyotes, where he served as an assistant coach for the past two seasons, overseeing the team's defense and penalty kill units. The Coyotes were tied for the top penalty kill unit in the NHL in 2018-19 at 85%, and the team tied for 5th in the NHL in goals against.

With his hiring in Hershey, Allen returns to the state where he started his coaching career in 1996-97. He served as an assistant coach with the ECHL's Johnstown Chiefs that season, and took over head coaching duties the following year. A former forward, Allen played 10 years professionally before moving behind the bench, including claiming back-to-back Kelly Cups with Carolina in 1989 and Greensboro in 1990.

Allen replaces Mike Eastwood, who left Hershey's coaching staff to accept a position outside the organization.

Elenberger, 25, returns to the Washington Capitals organization after spending time with the NHL club for parts of two seasons. He served as a coaching staff intern during the 2017-18 season and throughout the team's run to the 2018 Stanley Cup Championship. With the Capitals, Elenberger helped breakdown opponent’s tendencies and track in-game events, while also supporting the coaching staff by maintaining statistics and analytical trends. Prior to his time in the hockey operations department, Elenberger served as a marketing intern with the Capitals in 2016-17.

A native of Folsom, California, Elenberger played ACHA club hockey at Gonzaga University, and also worked as a special hockey instructor in Spokane, Washington. He also has worked with the NBA's Washington Wizards where he served as a basketball operations intern in 2017. He received his master's degree from Georgetown University later that year.

The Bears open the 2019-20 season on Saturday, Oct. 5 versus the rival Wilkes-Barre/Scranton Penguins. The puck drops at 7 p.m. at Giant Center. Tickets to all Hershey Bears home games are on sale now at the Giant Center Box Office, or online via Ticketmaster.