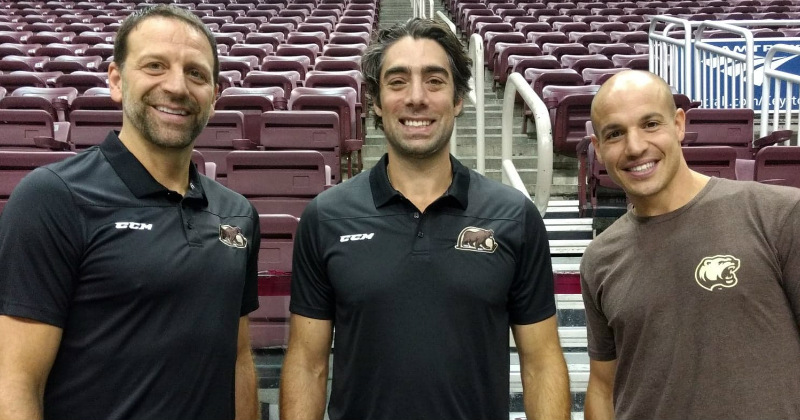 Greetings Bears fans, and hope your summer is going well! Zack Fisch, the Voice of the Bears here, for another 2019 Summer Mailbag!

Thanks for all the great questions via Twitter. Remember, just tweet me @zackfisch, or email me at zasfisch@hersheypa.com and your question may be featured in a future article! A lot has happend since the last time we talked, so let's dig in!

@JosephSzymanski
How big is Matt Moulson signing for this team? And does it show that Hershey May still have some pull power with its history over Vets?

The Matt Moulson signing was HUGE for the Bears. It checks all the boxes: Pure goal scorer, power play presence, and exceptional veteran leader. Please take a look at this article from The Athletic on what Moulson did to teach and guide the youngsters in Ontario. A player who scores 60+ points, has the experience that Moulson does, AND helps the young kids along on and off the ice is critical. He stopped by Hershey this week, and he's excited to be a Bear.

Regarding your question as to if Hershey still has pull with vets: Again, all signings, AHL or NHL, are orchestrated by the Washington Capitals. Hershey’s vice president of hockey ops Bryan Helmer is involved in any discussion, but ultimately, Washington builds the roster. Both the Capitals and the Bears know how critical it is to add key veterans who can help the team win, but also have the right personality and leadership abilities to aid development. The re-signing of Mike Sgarbossa and adding a guy like Moulson shows that commitment.

I’ve seen some narrative from Caps fans lately that a guy like Moulson, or all these other AHL signings the Bears are making, will take valuable ice time away from Capitals prospects. That’s simply not the case. Washington builds the roster and Washington hires the coaches in Hershey that run the team. The prospects are going to get all the opportunities in the world to shine. I’ve seen a few projections on blogs that 2nd rounder Brett Leason or free agent signing Joe Snively will be in South Carolina. That’s not going to happen. Those guys will get ample opportunities to earn playing time in the top-six.  Development is key, but we all know how much Bryan Helmer and Spencer Carbery want to win. Their goal will be to build this team into a Calder Cup Champion.

Additionally, all the other AHL signings are to build depth. The Bears had to dig deep outside the organization last year. Remember when PTO’s were being handed out to defenders around Christmas? Or when they were bringing in guys up front from other teams in the playoffs? That’s never ideal. Now, South Carolina will be stocked with players on AHL deals that can earn call-ups. It’s a new trend to add more players on AHL deals in the ECHL. The Maple Leafs had a double digit number of AHL contracts in ECHL Newfoundland this year. And Newfoundland went on to win the Kelly Cup. South Carolina wants to win too, and Hershey wans depth when call-ups or injuries occur. It’s a win-win.

@TaylorWalls21
Is Kody Clark expected to be in Hershey this season? Eligible to return to Juniors and lots of competition for forward spots could be negative for his development.

Clark is expected to be a Bear this season. The Capitals 2nd rounder in 2018 had 46 points (17 goals, 29 assists) in 57 games last year for the Ottawa 67’s. The winger will face stiff competition and will have to adjust to the pro game, but he’ll certainly get opportunities. Things could always change, but Clark and Riley Sutter project to be some of the new young guns up front.

@cswa11
With the amount of guys on AHL contracts for next year, what does a guy like Casey Bailey on a PTO need to do to earn a spot? How many spots would be earned in camp?

The Bears have a lot of depth this season, and as I stated above, that’s by design. Bailey will get a good look in camp. He’s been great against Hershey in his career, notching 17 points (7 goals, 10 assists) in 14 games vs. the Chocolate and White. He’s struggled in the KHL last year, and his team was so cash-strapped that they made him dress as a backup goalie for a game. Safe to say, he’s looking for a fresh start.  We know he has a heck of a wrist shot, and can be a key contributor on the power play. For me, Bailey is not a guy you have on your 4th line, so I think the clearest path he’d have to making the team would be if after training camp some of the new young faces don’t appear ready for top-six duties. He’ll have to earn the job and the chips will have to fall the right way, but he’s a great PTO to bring into camp, and again, shows just how deep the Bears are compared to past years.

@mhaar02
Does Samsonov finish this season in Hershey? Either takes Copley’s spot in DC or is traded due to a Holtby extension?

This is a very good question on a hot topic. I think Ilya Samsonov is going to make his NHL debut this year. I don’t know if he finishes the season in DC, but I think the Capitals need to see what he can do at the NHL level, even if it is for a few games. Holtby is a free agent after this season, and with what other star goalies have signed for this past summer, it’s going to be very hard to keep him around. The Caps took Samsonov in the 1st round, and he’s considered their goalie of the future. He might be their guy in 2020, but hasn’t played one second in the NHL yet, and asking him to be a #1 with no experience is a tall order for anyone.

Could Samsonov move up to DC full-time this season? With the salary cap, Washington will have to watch every dollar, so his contract being under a million dollars could help them save a few bucks.

Washington’s salary cap could impact a lot of things, and this is one of them. I know a lot of people have talked about this topic this summer, and it’ll be something to keep an eye on as early as in training camp.

@SinBinStingrays
Are the Bears still actively looking for any roster spots to fill, or are they holding tight to see what adjustments the Caps make to get salary cap compliant?

I think the Bears are pretty set with depth signings at this point. I imagine they’ll bring in a few tryout players to camp to take a look at, but the cupboard has been stocked with really good depth. Certainly the Capitals salary cap issues will come into play, and that could always mean a player from DC could make their way down to Hershey, which the Bears would welcome with open arms.

@BorlandJudith
When does camp start?

Not official yet, but should be the week of Sept. 23. Many players will still be in Washington at the start of camp, but we should have players on the ice in Chocolatetown sooner than later. I’m counting the days!

@waterthunder567
Who is the best ECHL presences you have for call up?

Little too early to tell depending on who makes the team, but if you have guys like Cole Ully, who scored 13 goals in the AHL just a few years ago, down in the ECHL, you have some pretty good options. Same goes on defense where you might your pick from Tommy Hughes, Tariq Hammond, or Ed Wittchow, who all have vast AHL experience. No guarantees those players aren’t in Hershey to start, but the Stingrays have to be happy with who they may get with the Bears and Capitals working to sign more AHL deals.

@CottonEyeJones
Any behind the scenes updates? Staff, equipment, GC happenings, the stuff the fans dont hear much about. And how about a baby shark update.

Few behind the scenes items are in the works. The locker room is getting some upgrades this year, including moving the sacred team logo to the ceiling, similar to what Penn State has. The team’s hot tub/cold tub area is totally being redone, and will now include a sauna as well. Around the Giant Center, you saw many player pillars on the concourse go up for the playoffs. Look for more of those this year. Additionally, another project is in the works in the building that looks to be on track to be ready for opening night.

Thanks for asking about Baby Shark, AKA my newborn son Jaxson. Both the little guy and mom are doing great. We’ll have him on skates as soon as he’s up and walking. Looking forward to having him at the Giant Center as the newest Hershey Bears fan this year. Hopefully he has more athletic talent than his dad!

@JarodHunterTho1
With some returns in Hershey and some players who have experienced with teams in ahl do you think this is Hershey’s year to win their 12th Calder Cup?

Well, Jaxson will be about 10 months old in June 2020. This is the year to win #12, because I want him to be small enough to sit in the cup. Seriously though, with the roster put together as of today, I like our chances. Let’s go get #12 and bring the Calder Cup back where it belongs!

Hockey is almost here! Until then, enjoy the little summer remaining!