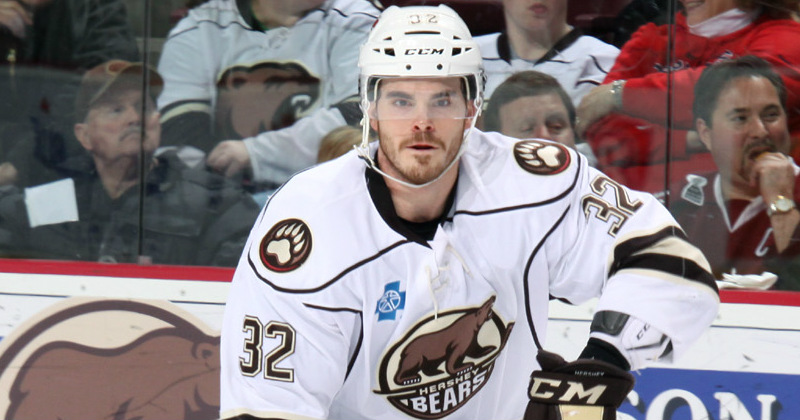 The Hershey Bears announced today that the club has signed defenseman Erik Burgdoerfer to a one-year, AHL contract for the 2019-20 season.

Burgdoerfer, 30, returns to Hershey after previously playing two seasons with the Bears from 2014-16. He enjoyed the best year of his AHL career in 2015-16 with the Chocolate and White, setting personal-bests in games played (74), goals (six), assists (14), and points (20). He helped Hershey to the 2016 Calder Cup Finals, playing in all 21 playoff games and registering four assists.

The Abington, Pennsylvania native has appeared in 317 career AHL games with Oklahoma City, Hershey, Rochester, and Belleville, collecting 80 points (18 goals, 62 assists), 266 penalty minutes, and a +26 rating. The 6-foot-1, 208-pound defender has spent the last two seasons with the Belleville Senators, serving as alternate captain in 2017-18, and being named captain in 2018-19. Burgdoerfer scored 18 points (five goals, 13 assists) in 64 games last season with Belleville under the direction of Troy Mann, his former coach in Hershey.

Burgdoerfer also played in four games last season for the NHL's Ottawa Senators. Following his time with the Bears, the former RPI standout has skated in eight NHL games with Buffalo and Ottawa, notching an assist. After 480 ECHL and AHL games, he made his NHL debut on Dec. 5, 2016 for Buffalo in a 3-2 overtime loss to Washington.

The veteran defender previously played for Hershey head coach Spencer Carbery in the 2014-15 season with the ECHL's South Carolina Stingrays. Burgdoerfer appeared in three games with South Carolina before joining the Bears for the remainder of the season.