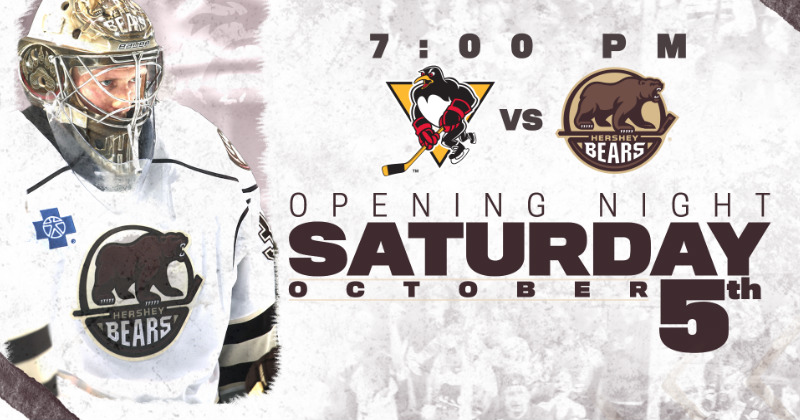 Puck drop for the Hershey Bears 2019-20 season is just 88 days away. The Bears, in conjunction with the American Hockey League, released further details for the club's home opener today. Hershey will open the home portion of its 82nd season in the AHL on Saturday, Oct. 5 at the Giant Center. The Bears battle the rival Wilkes-Barre/Scranton Penguins that evening at 7 p.m.

The club's home opener will be the first game in the I-81 rivalry series versus the Baby Pens. Hershey went an impressive 9-2-0-1 versus Wilkes-Barre/Scranton last season.

Head coach Spencer Carbery returns for a second year behind the Hershey bench after guiding one of the most impressive turnarounds in franchise history last season. The Bears, who were in last place in the entire AHL on Dec. 21, qualified for the Calder Cup Playoffs, thanks to a franchise record 17-game point streak (16-0-0-1), and a 27-5-4-1 record in the second half of the season, good for a .789 points percentage in the final 38 games.