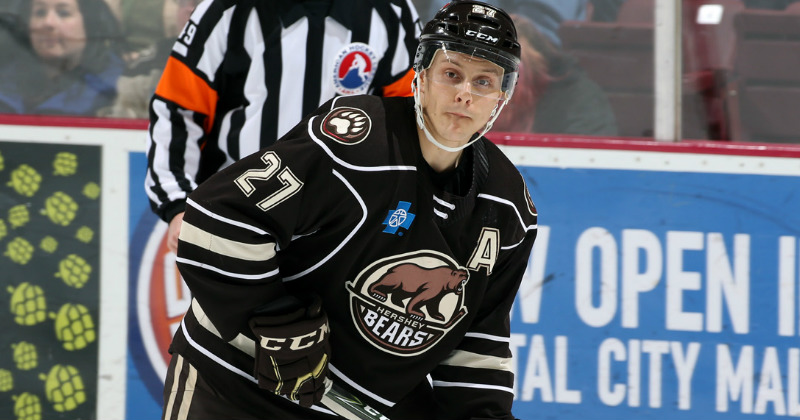 Greetings Bears fans, and hope your summer is going well! Zack Fisch, the Voice of the Bears here, for the first of our 2019 Summer Mailbags!

Thanks for all the great questions via Twitter. Remember, just tweet me @zackfisch, or email me at zasfisch@hersheypa.com and your question may be featured in a future article!

-Congrats to Charlotte on winning the Calder Cup. They were loaded with talent, and we saw it firsthand. The Bears were knocked out by the champions, and the best team in the AHL from start to finish.

-Game 7 of the Stanley Cup Final is Wednesday. What a series it’s been so far. It was a major letdown for the Blues not to grab their first Stanley Cup title in front of the home crowd in Game 6, but St. Louis went from last place in the NHL to start 2019 to one win away from glory, and on the journey, they have overcome a lot. Interim head coach Craig Berbue is a former Bear, and former Hershey forward Zach Sanford is having a great series so far for the Blues.

Now, without further ado, let’s get to your questions!

Kristen @ragolznetsirk
If a player has a 2-way contract, but they are in Hershey for the season, does their salary affect the caps salary cap?

Nic Benulis @The_Big_Nic
Do you think the Bears will re-sign Sgarbossa, Walker, Megna, and Ness? Which Bears free agents do you expect to stay and who do you think will leave?

I think the Capitals would love to re-sign a few of the players you mentioned. In fact, just based on their seasons' alone, I wouldn’t be surprised if Washington had already attempted to re-sign a few of those players. However, several of these players are coming off career-years and very well may want to hold off on accepting any offer to re-sign to test the NHL free agency market.

I’ll use Aaron Ness as an example here. I know we’d all love to have him back in Hershey. He’s a great leader and had the most points among any AHL defender at 55. With that being said, Washington is pretty set on defense at the NHL level and he’s not been able to crack their lineup regularly. He very well may want to test the free agency market and see if there is an NHL team that will give him a better opportunity to be an NHL regular. And if he goes that route, you can’t fault him, and you can’t fault Washington.

Other NHL teams may start talking to free agents on June 23, just over a week before free agency opens on July 1. So any of these players you mentioned could talk to teams then and always circle back if what they are looking for isn’t there. As I’ll say a few times in this article, free agency is a big day for the Bears, so it’ll be interesting to see what happens.

DJ Jones @CottonEyeJones
Based on current projections of who will be in Hershey, what area do you see as the weak/lacking position?

Plain and simple, the Bears need high-end forwards and top-six talent. There are a lot of intriguing prospects in the fold, and I look forward to a player like Garrett Pilon, who had a strong rookie year, taking the next step. All that said, the high-end talent and 1st round picks that a team like Charlotte had are not in the pipeline for the Bears for the incoming year. With Riley Barber saying he doesn’t see himself re-signing, and Mike Sgarbossa and Jayson Megna being unrestricted free agents, there are a lot of goals to replace. There could always be trades, but free agency and landing some big talent for the top line will be the biggest need. If Ness tests free agency as well, a strong veteran defender with some offensive pop will also be added to the wish list.

Steve Stultz @bcfdstifler
Do you think the Bears will get an enforcer so they aren't pushed around and off the puck with some smaller younger talent to give them more space to develop and make plays?

I don’t think the Bears will have someone on the regular roster next season (Like a Joel Rechlicz, Tom Sestito, or Zack Stortini) that will be around to strictly just fight. Days of teams regularly running enforcers out there every game are mostly over. Speed and playing a heavy game are what teams are having success with. Players like Liam O’Brien, Tyler Lewington, and Beck Malesntyn all play a heavy game. All that said, I wouldn’t be surprised if the team did add some depth on an AHL deal for a call-up type player who has a little more muscle and can drop the gloves if needed. Any player brought in would have to be an effective player as well, not just a fighter.

Richard Blosser @Rbloss64
Which Western conference team would you like to see the Bears play?

I’d love to play Chicago personally. Going to California would also be fantastic as I’d love to play in San Diego, but Chicago is a team that has had a lot of success and former Bears goalie Wendell Young runs the show there. Hershey and Chicago are often thought of as some of the top destinations in the AHL, so getting those two teams together more often would be fun.

Corey Swartz @cswa11
Most intriguing rookie coming in next year in your eyes?

To me, it’s defenders Alexander Alexeyev and Martin Fehervary. Alexeyev was a 1st round pick in 2018, while Fehervary was taken in the 2nd round. I was extremely impressed by both at the NHL Rookie Showcase in Florida last summer. The two of them really stood out, even over players who already had a year under their belt in pro hockey. Defensive depth is obviously Washington’s strength. Fehervary moves very well, and Alexeyev is a big body who had a strong first pass, good vision, and had 43 points in 49 games with Red Deer of the WHL. He also added six points in seven games at the World Junior Championships for Russia. The blue line looks crowded, but I think each of these players are impact players.

terrymoore‏ @terrymoore7053
What's your take on Washington's cap space and their ability to land a couple legitimate AHL goal scorers, otherwise your job next year will be just as tough trying to make the game's sound exciting as this year.

Good to have Terry Moore join the Summer Mailbag! Thanks for the question. I do think that there could be some rosters spots open for the Capitals in the bottom six, meaning that Washington is a more attractive option this summer for bubble guys that are major impact AHL scorers. The Capitals could offer these guys a shot to make the NHL club, and if they don’t, they go to the premier AHL market in Hershey. In the last few years, Washington hasn’t needed a lot of forwards via free agency that were bubble guys. As I’ve mentioned above, the Bears need top line forwards for next season, and have a lot of goals to replace. There is so much competition for free agents now, and everyone one is paying, but depth forwards and guys who can put the puck in the net is certainly a big need.

Rita Z‏ @RitaZ143
When do the schedules come out for AHL and NHL? How’s the nursery going?

I’d have to imagine if things stay the same, the NHL schedule will come out in the next few weeks. It’s usually one the last few weeks in June. If the AHL stays true to what they did last year, we’d be looking at the first week or two of July for the Bears schedule.

The nursery is slowly but surely coming along, thanks for asking. The little boy is due in August, and he is on track and Mom doing great. On the other hand, I still have lots to learn before he’s born!

HanoiIG @HanoiIG
How does the goaltending situation appear to be shaking out? Didn't they draft or sign a new one? If Copley is traded, will Samsonov(or Vanecek) go up? Is Milner in the mix?

Vitek Vanecek is an RFA, but he should be re-signed, meaning on paper, it’ll be the same tandems in the NHL and AHL: Holtby and Copley in DC, and Vanecek and Ilya Samsonov in Hershey. Parker Milner and new signing Logan Thompson provide depth on AHL deals, but the pair are likely to be South Carolina’s tandem.

I don’t see anyone getting traded right now. Vanecek and Samsonov still need time in Hershey to develop, and outside of 2018 draftee Mitchell Gibson, who is just starting his NCAA career this year, the Capitals don’t have any incoming goaltending prospects.

Luke Adomanis @LukeAdomanis
What the heck are they going to do on defense next season? If they are adding Alexeyev, Fehervary, and Nardella on top of Johansen, Hobbs, Geisser, Lewington, Bindulis, and possibly Williams or Ness, they'll be a lot good guys sitting

That’s a lot of bodies! Caps GM Brian MacLellan has said before that he wouldn’t be opposed to moving prospects to help add forwards prospects. With that many defensive prospects, and the lack of high-end forward prospects, maybe a trade would make sense this summer.

Lewington could possibly be the 7th defender in Washington, and Bindulis could always get minutes in South Carolina as his injuries have meant that he hasn’t played a lot over the last few years. But that still leaves you a few too many defenders. It’ll be interesting to see what the Capitals do here. A veteran defender (Ness, or someone if Ness does not re-sign) is still needed as well. I don’t think they’ll rush anyone, and guys will have to earn their minutes. We are a long way from October, but this is certainly something to watch.

Thanks to all who submitted questions!  I hope you enjoy Game 7 of the Stanley Cup Final, and I look forward to checking in again soon.