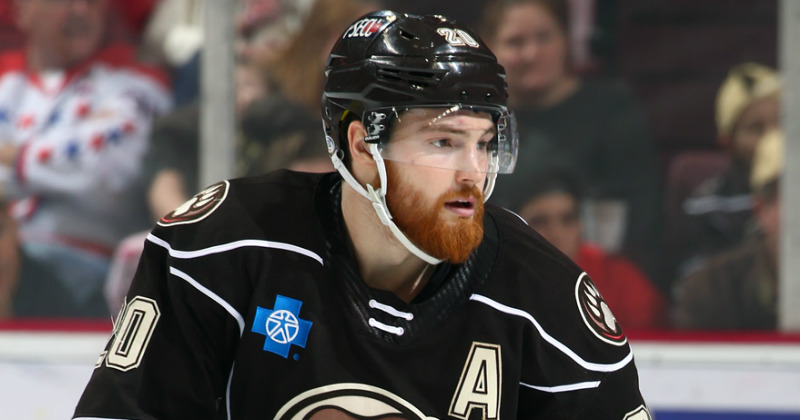 The Washington Capitals announced today that the club has re-signed forward Liam O'Brien to a one-year, two-way contract for the 2019-20 season. The announcement was made by Washington's senior vice president and general manager Brian MacLellan.

O'Brien, 24, completed his fifth season as a member of the Bears in 2018-19. The alternate captain collected 28 points (15 goals, 13 assists) and tallied 118 penalty minutes. O'Brien tied a career-high in power play goals (3) and game-winning goals (4), while playing in a career-best 74 games for the Chocolate and White. He also scored one goal in eight playoff games for the Bears.

The 6-foot-1, 215-pound winger has played his entire 311-game AHL career with Hershey, scoring 108 points (53 goals, 55 assists) and adding 555 penalty minutes. He was Hershey's IOA/American Specialty AHL Man of the Year in 2016-17, and was named the winner of the Arlene Tighe Award as the Bears Unsung Hero in 2017-18, a year in which he scored a career-high 17 goals. O'Brien has also appeared in 44 playoff games for Hershey, scoring 13 points (eight goals, five assists), and helping the team to the 2016 Calder Cup Finals.

The Halifax, Nova Scotia native has appeared in 17 career NHL games with the Capitals, collecting two points (one goal, one assist) and adding 28 penalty minutes. He made his NHL debut on Oct. 9, 2014 versus Montreal, and added his first NHL point with an assist on Oct. 14, 2014 against San Jose. O'Brien scored his first career NHL goal on Oct. 26, 2014 at Vancouver.

He was originally signed as an undrafted free agent by Washington on Oct. 6, 2014.