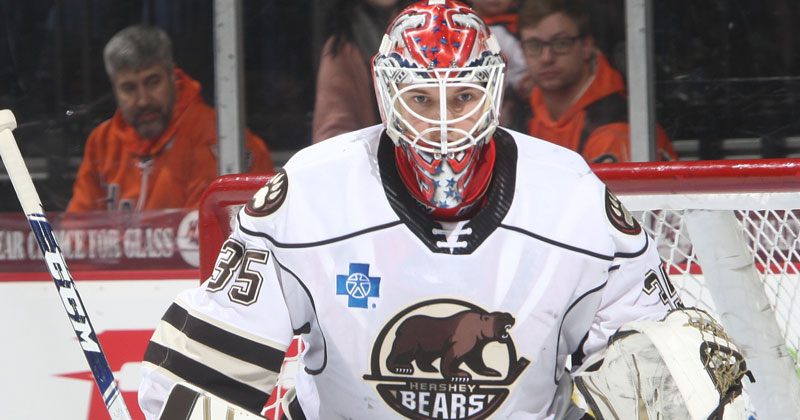 The Hershey Bears erupt with three goals in the second period to beat the Lehigh Valley Phantoms, 3-0 on Saturday night at the PPL Center in Allentown. The win snapped a nine-game losing streak at the PPL Center, which dated back to Apr. 5, 2017. Ilya Samsonov stopped all 18 shots to record his first career AHL shutout.

The Bears dominated the opening 20 minutes, but were not rewarded on the score sheet despite a 15-5 shot advantage. Into the second frame, Hershey's fortunes changed with another high-end effort for 20 minutes. Ryan Sproul opened the scoring at 2:58 after snapping a wicked wrist shot past Phantoms goaltender Alex Lyon. The play occurred on an offensive zone transition where Juuso Ikonen sent a drop pass for Sproul, who was trailing the play.

Later in the period, Riley Barber scored a pair of 4-on-4 goals to provide his club a 3-0 advantage. At 11:27, Barber danced around the net on a quick wraparound and beat Lyon to the right post. Less than five minutes later, Barber scored unassisted on a 2-on-1 rush past Lyon's short-side at 16:15. Shots after 40 minutes were 27-9 Hershey. Samsonov helped the Bears kill a 5-on-3 disadvantage early in the third period to keep the 3-0 lead in tact. Hershey's penalty kill responded with a 3-for-3 game after going 3-for-7 in the previous night against Springfield.

The Hershey Bears return to action tomorrow with a rematch against the Lehigh Valley Phantoms at Giant Center. It's PSECU Knit Cap Night. First 4,000 fans will receive a knit cap, courtesy of PSECU. Ticket information is available online at HersheyBears.com.