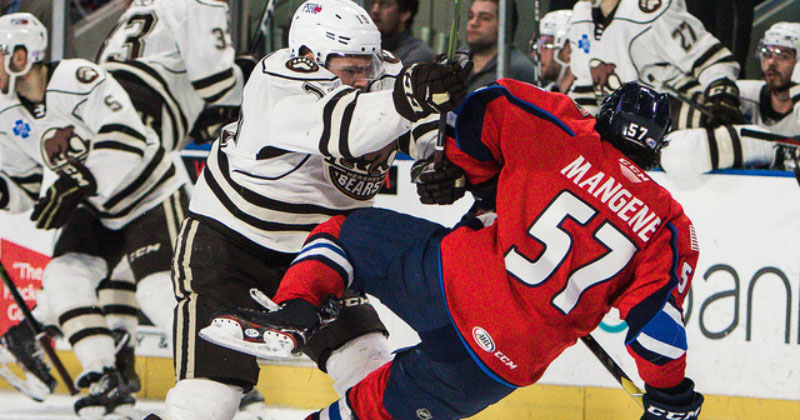 T-Birds Skate Past Bears With 6-2 Win

Mike Sgarbossa scored early for the Hershey Bears, but the Springfield Thunderbirds rattled off five straight goals to down the Chocolate and White, 6-2 on Friday night at the MassMutual Center.

The Bears went on an early power play after Ryan Horvat was whistled for tripping at 3:19. After winning the offensive zone face-off, Riley Barber sent a perfect backdoor pass to Sgarbossa, who scored his 16th goal of the season only 11 seconds into the man-advantage. After the first media timeout, the Springfield offense came alive for a pair of even strength goals on Vitek Vanecek. After Vanecek made an athletic save on an odd-man rush, Riley Stillman was left all alone in the low-slot and buried a centering feed from Paul Thompson at 9:15.

Springfield grabbed a 2-1 advantage only 2:08 later when Anthony Greco threw a puck on goal from the right-wing half boards and beat Vanecek low to the ice. The goal was Greco's fifth tally against the Bears in the season series. Before the first period closed, the T-Birds added a power play marker to extend their lead to 3-1. At 17:32, Matt Marcinew buried a sub-goal line feed from Harry Zolnierczyk to beat Vanecek. The tally marked power play goals in eight straight games for Springfield. Shots after 20 minutes were 13-7 Thunderbirds.

The T-Birds added two more goals in the second stanza with both coming on the power play to grab a commanding 5-1 lead. Sebastian Repo scored at 4:49 to chase Vanecek from the game. Ilya Samsonov entered in relief marking the first time this season a Bears goaltender did not finish a game he started. Springfield's power play improved to 3-for-6 on the night at 14:13 with a blast from Matt Mangene from left-wing past Samsonov. Shots after 40 minutes were 22-20 Springfield.

Into the third period, Juuso Ikonen brought the Bears within three goals at 2:28. On a persistence play at the front of the net, Ikonen chipped a second chance opportunity from the low-slot past Thunderbirds goaltender Samuel Montembeault. Before the night's finish, Springfield added their fourth power play goal of the game at 16:10. Zolnierczyk scored on a lively rebound off the end wall to beat Samsonov moving to his right. The power play goal tied a season-high, four power play goals against in a single game, originally set on Nov. 11 at Syracuse. Final shots on goal were 31-30 Hershey. The Bears power play finished 1-for-5 after scoring on the game's first try, and 3-for-7 on the penalty kill.

The Hershey Bears return to the ice on Saturday, January 12 with a road tilt against the Lehigh Valley Phantoms. The Bears will look to snap a nine-game losing skid in games at the PPL Center in Allentown. Puck drop is slated for 7:05 p.m. Voice of the Bears Zack Fisch will have the call on the Bears Radio Network.