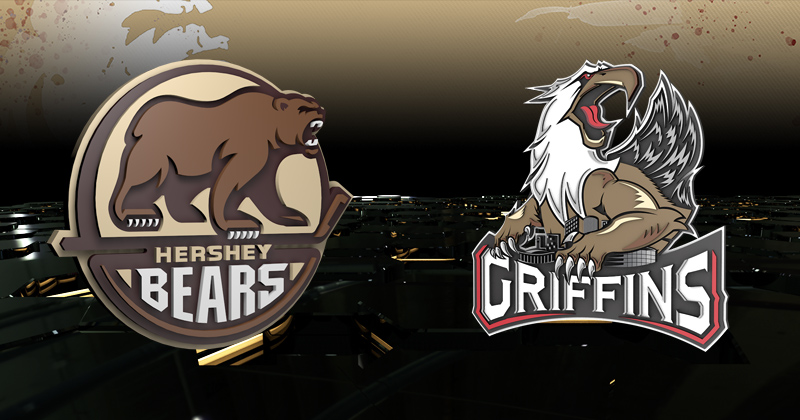 Tonight, the Hershey Bears battle the Grand Rapids Griffins, AHL affiliate of the Detroit Red Wings. The Bears and Griffins met earlier this season on Oct. 12 at Van Andel Arena, and the Chocolate and White dropped a 6-3 decision. Hershey has never won on home ice versus Grand Rapids (0-4-0-0).

LAST TIME OUT:
The Bears take the ice tonight for the first time since last Sunday when the Chocolate and White claimed a 2-1 victory over the Providence Bruins at Giant Center. Hershey forward Beck Malenstyn opened the scoring with his third goal of the season at 5:06 of the first period. Karson Kuhlman scored for Providence at 11:16 of the second period to tie the game, but only 1:22 later, Steve Whitney scored the eventual game-winning goal for Hershey. Ilya Samsonov earned the win in goal for the Bears, stopping 22 shots. The Griffins played last night in Wilkes-Barre/Scranton, falling 3-2 in a shootout. Matt Ford and Turner Elson had the goals for the Griffins, while Ryan Haggerty scored twice for the Baby Pens.

GRAND RAPIDS HISTORY:
Tonight marks the 10th all-time meeting between the Bears and Griffins. The Griffins have dominated head-to-head play, posting an 8-1-0 record all-time versus the Bears. Grand Rapids has won two straight meetings, including upending the Chocolate and White at the Van Andel Arena earlier this season, claiming a 6-3 win on Oct. 12. Sergei Shumakov, who has since returned to Russia, had two goals for the Bears, while top prospect Filip Zadina, who is not with the team this weekend after skating for the Czech Republic at the World Junior Championships, scored twice for Grand Rapids. The Bears lone win versus Grand Rapids came Oct. 21, 2017 as Hershey claimed a 4-2 decision on road. Chandler Stephenson had a hat trick and Adam Carlson won his first AHL game between the pipes.

GRAND RAPIDS AND HERSHEY CONNECTIONS:
Hershey defender Ryan Sproul played with Grand Rapids from 2012-2017, skating in 220 games with the Griffins over parts of five seasons. Sproul was a member of the AHL’s All-Rookie Team with the Griffins in 2013-14, and totaled 29 goals and 66 assists for 95 points in his career with Grand Rapids. Grand Rapids roster features three former members of the Chocolate and White in forwards Carter Camper, Matt Ford, and Derek Hulak. Camper had 34 points with Hershey in 2015-16, and led the Bears in playoff scoring with 17 points as Hershey advanced to the 2016 Calder Cup Finals. Ford appeared in 39 games with the Bears in 2011-12, scoring 28 points. Hulak skated in eight games with Hershey on a PTO to start this season, scoring three points (two goals, one assist) before joining the Griffins. Additionally, Hershey vice president of hockey operations Bryan Helmer played two seasons with the Griffins from 2004-06.

HEY NOW, YOU'RE AN ALL-STAR:
On Thursday, the American Hockey League announced that Hershey goaltender Vitek Vanecek was selected to play for the Atlantic Division at the 2019 Lexus AHL All-Star Classic in Springfield. Vanecek ranks ninth in the AHL with a 2.55 goals against average. He has posted a 7-7-2 record with a .909 save percentage and one shutout. Vanecek has allowed two or less goals in nine of his 16 appearances this season. Vanecek has not faced Grand Rapids in his 88-game AHL career. Grand Rapids All-Star Classic selection is veteran forward Chris Terry, who leads the AHL with 21 goals and is third in the league with 38 points. He has scored 24 points (11 goals, 13 assists) in 28 career games versus Hershey.

REINFORCEMENTS:
The Bears could see the return of several key players this weekend. Defender Tyler Lewington has returned from the Washington Capitals after scoring a Gordie Howe hat trick in only his second NHL game on Dec. 29. Forward Shane Gersich was a full practice participant this week. He has not played since Dec. 7, a span of 10 games, with an upper body injury. Defender Connor Hobbs was also a full practice participant and could return to the lineup for the first time since Dec. 15 after missing seven games with an upper body injury. Additionally, Tobias Geisser has returned from his loan to Switzerland’s World Junior Team. He did not see any game action for the Swiss.