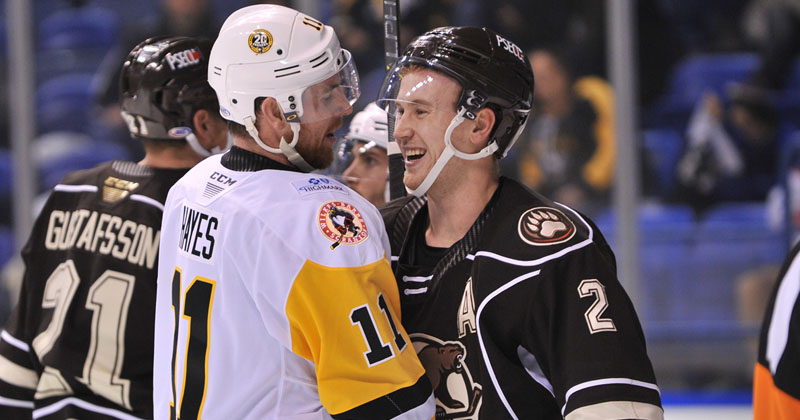 The Hershey Bears slow start is long behind them. The Chocolate and White earned another pair of victories this past weekend, giving the club points in five of its past six games. After a 4-1 loss at rival Wilkes-Barre/Scranton on Friday evening, the Bears bounced back with a victory over the Penguins Saturday at Giant Center, and earned a win over the Lehigh Valley Phantoms on Sunday.

The Chocolate and White opened last week with a setback at Wilkes-Barre/Scranton. The Bears fell behind in the opening period and never recovered. Adam Johnson had a pair of goals for the Baby Pens, while Liam O’Brien had the lone goal for the Bears. Vitek Vanecek stopped 24 shots in the loss for Hershey.

The following evening, Hershey returned to home ice for the first time in 21 days. The Bears earned their first home victory of the season, beating the Penguins 4-3 in a shootout. In an entertaining game, the Bears came back from one-goal deficits three times as Mike Sgarbossa, Riley Barber, and Beck Malenstyn scored. The game progressed to a shootout, and Barber and Shane Gersich struck for the Bears to give Hershey the victory.

On Sunday, the Chocolate and White topped the Phantoms, 3-1 at Giant Center. Sgarbossa scored only 1:17 into the game, O’Brien added a marker in the second period, and Barber tallied on a penalty shot in the third period. Vanecek made 34 saves between the pipes to earn the victory

HOME COOKING: Hershey forward Mike Sgarbossa seems to like his new home. The new Bears forward scored in both contests at Giant Center this past weekend, giving him goals in all four of Hershey’s home games thus far this season. The Ontario native is second on the team in goals with four, and also is tied for second on the team with six points.

BARBS BREAKS OUT: After going six games to open the season without a goal, Hershey forward Riley Barber had a breakout weekend. The winger scored in both home games, and posted a season-high seven shots both on Saturday and Sunday. The Pittsburgh native now has 61 goals in 181 career AHL games.

FIRSTS FOR BECK AND ILYA: Saturday’s game marked firsts for a pair of Bears. Beck Malenstyn’s goal in the third period was the first of his professional career. Between the pipes, Ilya Samsonov returned from a lower body injury and earned his first AHL win, stopping 19 shots, and both shootout attempts he faced in the win over Wilkes-Barre/Scranton.

200 FOR NESS: Veteran defender Aaron Ness hit a milestone in Sunday’s victory. The Minnesota native earned an assist on Mike Sgarbossa’s first period goal, giving him his 200th AHL point. The alternate captain has scored 38 goals and 162 assists in 459 career AHL games with Bridgeport and Hershey.

BRICK WALL VITEK: Hershey netminder Vitek Vanecek continued his sensational play this weekend, earning the win on Sunday with 34 saves versus the Phantoms. In his last five appearances, Vanecek is 3-1-0-1 with a 1.97 goals against average, a .938 save percentage and one shutout. All three of his victories have come versus divisional opponents.

BEARS BITES: Hershey forward Liam O’Brien has goals in two straight games and has five goals in his past seven contests...Jonas Siegenthaler’s next game will be his 100th with the Bears…Forward Steve Whitney has points in three of his past four games, collecting a goal and two assists…Hershey defender Logan Pyett is four games away from 500 in his professional career…Hershey now has two wins in three tries versus Wilkes-Barre/Scranton. The club had just two wins in the 12 games with the Penguins last year…The Bears announced on Tuesday that the club released forward Jeremy Morin from his professional tryout agreement. Morin skated in three games with Hershey.