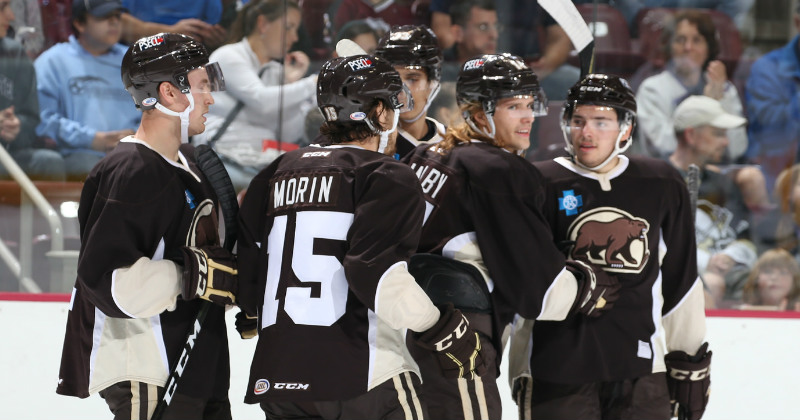 The Hershey Bears announced today the club's roster for the opening night of the 2018-19 season. Hershey will open the new season with 27 players, including 16 forwards, nine defensemen, and two goaltenders. The club drops the puck on the new campaign this Saturday, Oct. 6 versus the Syracuse Crunch at Giant Center.

Forwards Jeremy Morin and Derek Hulak have agreed to professional tryout agreements. Additionally, the Bears have signed forward Steven Whitney to an AHL contract. The Bears also announced that forward Grant Besse and defenseman John MacLeod have been re-assigned to the club's ECHL affiliate, the South Carolina Stingrays. Forward Mathias Bau will start the season on the Washington Capitals injured non-roster list.

Under the direction of new head coach Spencer Carbery, Hershey's roster features 10 players who will get their first AHL regular season action this year, including eight forwards, one defender, and one goaltender. Rookie netminder Ilya Samsonov is one of the top goaltending prospects in hockey after being selected in the 1st round, 22nd overall, by the Washington Capitals in 2015. He'll team up with third-year Bear Vitek Vanecek, a 2nd round selection of Washington in 2014, to form Hershey's goaltending tandem this season.

A total of 12 players who skated with Hershey last season return to the 2018-19 roster, including forward Riley Barber, the team's leader in goals last season. Barber, a Pittsburgh native, enters his third season with the Bears after collecting 20 goals in 2017-18. Also returning up front is Liam O'Brien who is coming off scoring a career-high 17 goals in 2017-18. The majority of Hershey's blue line from last season returns, including the club's 2017-18 Rookie of the Year, Lucas Johansen. The 2016 1st round selection of Washington had 27 points last season for the Chocolate and White.

The Hershey Bears 2018-19 season is almost here! The opening weekend features the home opener on Saturday, Oct. 6 vs the Syracuse Crunch, and Washington Capitals Night on Sunday, Oct. 7 vs the Bridgeport Sound Tigers, featuring a visit from the Stanley Cup®. For more information on tickets and the 2018-19 season, visit HersheyBears.com.