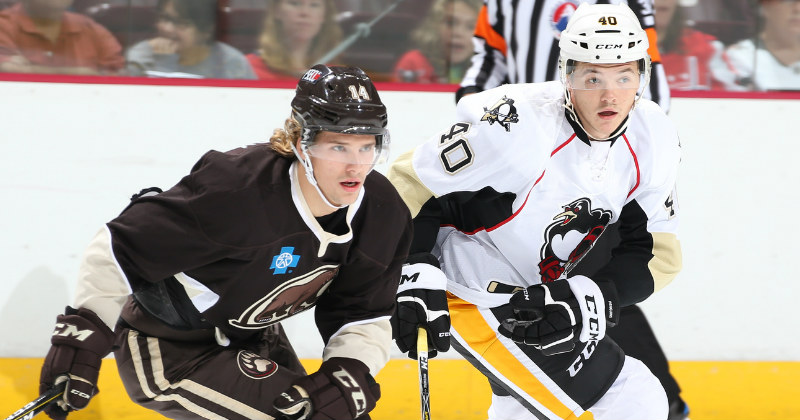 The Hershey Bears closed out its preseason schedule against the Wilkes-Barre/Scranton Penguins, dropping a 3-2 decision on Sunday night at Giant Center. Axel Jonsson-Fjallby and Shane Gersich both tallied for the Bears.

Similar to last night's game at Mohegan Sun Arena, Wilkes-Barre/Scranton drew first blood in the opening frame. After a turnover behind the net, and Wilkes-Barre/Scranton's Nick Saracino benefited by scoring into an open net at the 10:03 mark. Hershey goaltender Ilya Samsonov finished the first period stopping 11 of 12 shots.

At 16:17 of the opening frame, the Chocolate and White drew even courtesy of Axel Jonsson-Fjallby. In the offensive zone, Jonsson-Fjallby wheeled around the perimeter with the puck and sniped a shot past Pens' goaltender Anthony Peters.

Into the second stanza, Shane Gersich provided the Hershey with its first and only lead of the preseason. After a dynamic entry into the offensive zone, Maxi Kammerer pulled Peters out of position from the left-wing and centered a feed into the blue paint. In the crease, Gersich knocked home the loose puck to make it 2-1 Hershey at 11:52. The Penguins answered back to re-tie the score only 24 seconds later. At the 12:16 mark, Troy Josephs beat Samsonov to knot the score prior to second intermission.

In the third period, the Penguins scored the eventual game-winner at the 12:29 mark. After a flurry of saves by Samsonov, Wilkes-Barre/Scranton cashed in a on a second opportunity from the low-slot. After an initial stop on Tim Erixon, Renars Krastenbergs beat a sprawling Samsonov on the rebound while moving to his left. The Penguins finished the night out shooting the Bears by a 29-28 margin. Hershey finishes the preseason with a 0-2-0-0 record prior to opening their regular season next weekend.

The Bears return to the ice next on Saturday, October 6 against the Syracuse Crunch at 7 pm. The first 8,000 fans will receive a magnet schedule courtesy of PNC Bank, as well as all fans in attendance will receive a complimentary Hersheypark Pass redeemable for one-day admission. Ticket information is available online at HersheyBears.com or by calling 717-508-BEAR.