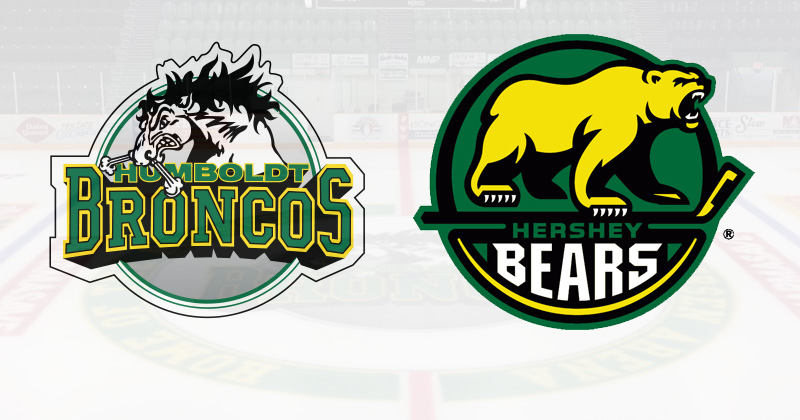 The Hershey Bears announced today that the club will honor and pay tribute to the Humboldt Broncos hockey team on Saturday, Apr. 14. The Bears host the Bridgeport Sound Tigers that evening at 7 p.m., and the game will feature a special pre-game remembrance, as well as opportunities to raise funds for the 16 lives lost, and the many more impacted, as a result of the junior hockey team's tragic bus accident last Friday.

The Hershey Bears will make a monetary donation to those impacted by the tragedy. Fans who are able are asked to help this hockey community heal by making a donation on Saturday night.

Fans are encouraged to stop by Section 125 for a variety of ways to help those in need. A special raffle will be held with fans having the opportunity to win team signed items, including a Bears logo plaque in Humboldt's green and yellow motif, a goalie stick, a player stick, and a helmet. The raffle will also include an additional plaque in Humboldt colors that will be signed by both the Bears and the Sound Tigers. The raffle will conclude at the start of the third period Saturday. All proceeds raised from the raffle will be donated to Humboldt.

Additionally, all proceeds from the Hershey Bears Booster Club's 50/50 for both Saturday, and Sunday, will be donated to the families impacted by the accident. The 50/50 will conclude at the start of the second period each night.

The Bears will also be accepting donations from fans as jars will be set up outside Section 125 for those who wish to make a contribution.

Fans are asked to be in their seat early for a special pre-game presentation. As the entire hockey community has been impacted by this tragedy, the ceremony will feature both the Bears and Bridgeport Sound Tigers, as well as skaters from the Central Pennsylvania Interscholastic Hockey League. Prior to puck drop, O Canada, the Canadian national anthem, will be played, and fans are encouraged to honor those in Humboldt by joining in the singing.

Additionally, all members of the Bears will be wearing helmet stickers that feature the Humboldt Broncos logo.

Along with the team's fundraising efforts, fans may make a donation online at the "Support the Humboldt Broncos" GoFundMe page.