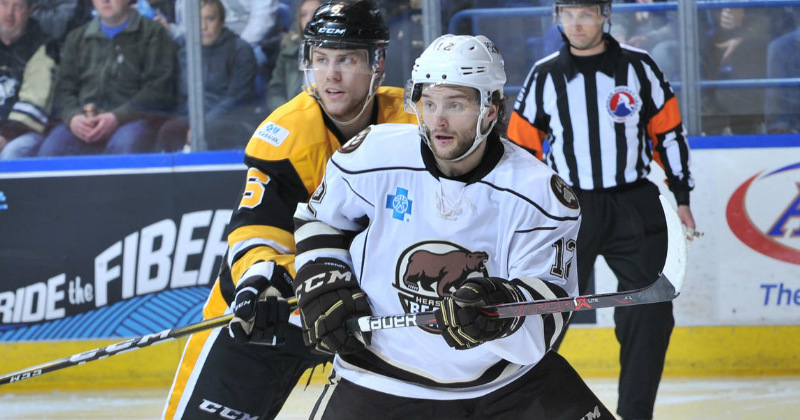 The Hershey Bears closed out the month of February with a 3-2 defeat against the Wilkes-Barre/Scranton Penguins at the Mohegan Sun Arena on Sunday. The loss snapped Hershey's six-game point streak.

Both teams wasted little time finding the scoresheet, as Hershey's Riley Barber scored for his second straight night to make it 1-0 Hershey. At 2:09, Travis Boyd sent a no-look backhand pass from behind the net to an unmarked Barber. Penguins' goaltender Casey DeSmith was caught on the opposite post, and Barber deposited his 19th goal of the season.

Only 51 seconds later, Wilkes-Barre/Scranton responded to even the score. Gage Quinney weaved his way into the low slot past a sliding Aaron Ness, and put the puck on a platter for Tom Kostopoulos. From between the circles, Kostopoulos beat Hershey goaltender Pheonix Copley on a quick slapper to tie the game. Shots after 20 minutes were 10-8 in favor of the Penguins.

Both teams traded quick strikes once more near the end of the second period. Wilkes-Barre/Scranton received their first lead of the night courtesy of their first power play. At 14:38, Tyler Lewington was sent to the sin-bin for tripping, enabling the man-advantage. Adam Johnson deflected an Ethan Prow center-point drive into the net at 15:56.

However, the Chocolate and White responded at 17:08. On a 200-foot transition play, Wayne Simpson started a tic-tac-toe passing play finished by Tyler Graovac for the equalizer. In his 300th professional game, Graovac finished a back-door feed into an open net following a crisp primary pass from Nathan Walker. It was Graovac's 10th goal of the season.

In the third period, the Penguins scored at 10:06, and the Bears were unable to find an answer. Johnson scored his second goal of the night on a delayed penalty after finishing a lively rebound following a Teddy Blueger shot. The goal came on a quick counter transition after multiple Hershey players overskated a loose puck at center ice.

The 3-2 loss for the Bears was their first regulation defeat dating back to February 10 against the Hartford Wolf Pack. Hershey's record slides to 23-26-4-4, while the Penguins improve to 32-16-4-1. The Penguins have won five straight games versus Hershey in the season series.

The Bears return to the ice on Friday, March 2. It's the sixth and final time the Bears will visit the PPL Center this season in a match up against the Lehigh Valley Phantoms.