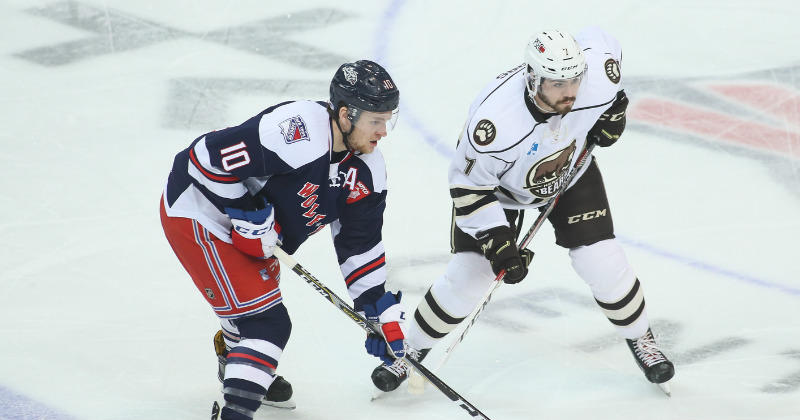 Win Streak to Five with 4-2 Victory at Hartford

Nathan Walker scored twice, and late game heroics lead the Hershey Bears past the Hartford Wolf Pack, 4-2, at the XL Center on Friday night. The win extends Hershey's season-long winning streak to five games, including four in a row away from Giant Center.

After a scoreless first period in which the Bears led in shots, 12-6, Walker opened the scoring for Hershey at 4:31 of the middle stanza. After Jeremy Langlois fought off pressure along the left-wing half wall, he centered a pass towards the high slot for Walker. With a screen set in front of Hartford goaltender Chris Nell, Walker snapped a wrist shot into the cage.

Hershey's 1-0 lead stood until the later stages of the period. Hartford's Cole Schneider roofed a sharp angle shot at 18:45 for his 11th goal of the season. The goal came following Hershey's inability to add insurance on a 5-on-3 advantage for one minute.

Overtime appeared to be on the horizon, but Joe Whitney scored a dramatic, late goal off a face-off with 2:03 to play. In Whitney's first game at Hartford since being traded to Hershey on February 9th, he struck against his former team at 17:57. Immediately following an offensive zone face-off, Travis Boyd pulled the puck back to Whitney's tape. Whitney's conversion was his 11th goal of the season and Boyd's team-leading 27th assist.

Hartford called timeout immediately following the goal, won the center ice face-off, sent the puck into the Bears' zone, and quickly pulled Nell for the extra attacker. On the 6-on-5 advantage, Hartford grabbed the momentum back and tied the contest at 18:23 courtesy of Scott Kosmachuk.

Just when it appeared overtime would be looming once more, the Bears scored nine seconds later for their third separate lead of the night. Tyler Graovac threw the puck in front from the corner, and Walker spun and fired a puck on edge past Nell to give Hershey a 3-2 lead.

Walker was sprung on a breakaway with an empty net, but was hooked from behind to breakup the opportunity for the hat-trick. Moments later, Walker found Langlois for the empty net tally at 19:33.

The Hershey Bears continue their latest three in three stretch tomorrow night at Giant Center. For the first time ever in Hershey, the Bears will play host to the Rockford IceHogs. Puck drop is scheduled for 7 p.m.