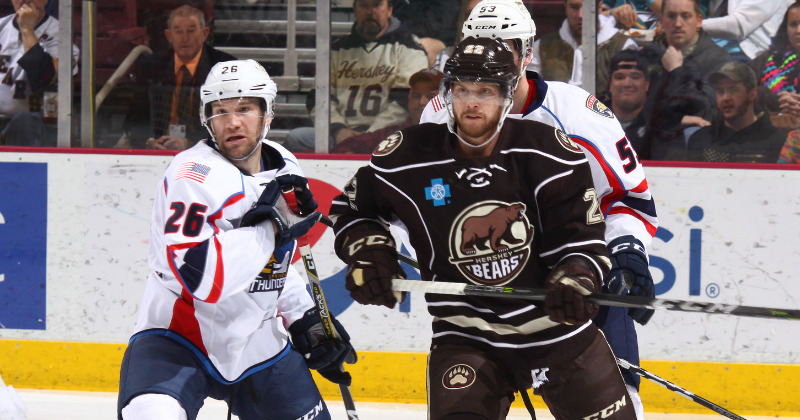 The Hershey Bears rallied in the third period to force overtime, but fell in the extra-session, 2-1, to the Springfield Thunderbirds on Wednesday night at the Giant Center. The overtime loss extends Hershey's point streak to five games.

The low scoring affair opened in the first period by Springfield while shorthanded. Entering tonight's game, Hershey was the only AHL team to have not allowed a shorthanded goal on the season, but that was changed mid-way through the opening frame.  At 7:50, Alexandre Grenier scored his ninth marker of the season to put the Thunderbirds up 1-0. Just 15 seconds into a Hershey power play, Grenier snapped a shot from a sharp angle past Pheonix Copley from the right wing.

In the third period, the Chocolate and White found the much anticipated equalizer at 14:38. On a quickly developed odd-man rush, John Albert slid a crisp pass across for Dustin Gazley, who dished in his fourth goal of the regular season. The goal was the 100th point in Gazley's career as a member of the Bears.

The tally forced a 3-on-3 sudden death overtime, where the Thunderbirds grabbed the deciding goal. Bobby Farnham scored the winner at 3:00, but Hershey immediately protested. Farnham took a shot from the left wing that Copley stopped, and as the goaltender covered the puck, Farnham collided with Copley, freeing the puck, and sending the netminder sprawing to the ice. As Copley attempted to recover, the puck came to Farnham in front, and he scored amid the chaos. The play was not reviewable, so the goal stood as the winning marker.

The overtime defeat moves Hershey's record to 17-16-2-3, while the Springfield Thunderbirds improve to 15-21-1-1.The Bears power play finished the night 0-for-5 while Springfield was 0-for-3. Hershey outshot Springfield 36-23.

The Bears return to the ice on Saturday, January 13 as they visit the Lehigh Valley Phantoms at the PPL Center. The Voice of the Bears, Zack Fisch has the call on the Hershey Bears Radio Network. Puck drop is slated for 7:05 p.m., with pregame kicking off at 6:35 p.m.