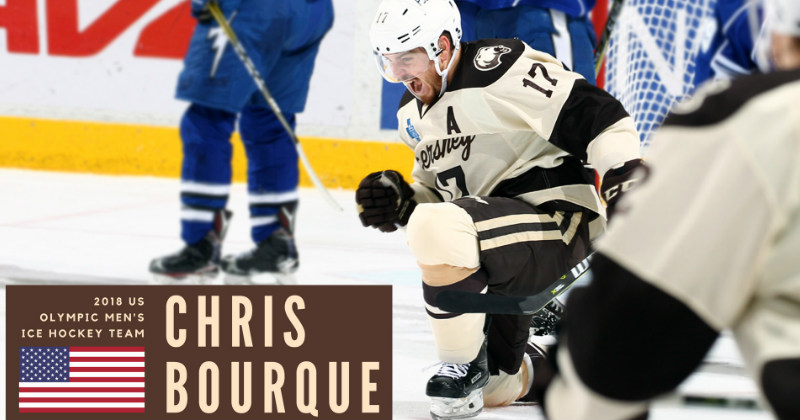 USA Hockey announced Monday afternoon that forward Chris Bourque of the Hershey Bears has been named to the U.S. Men's Olympic Ice Hockey Team for the 2018 PyeongChang Winter Olympic Games.

“This is obviously an unbelievable honor for myself and my family,” said Bourque. "It's one of the biggest moments in not only my hockey career, but in my life. Playing in the Olympics—I don't even know if it's something you really dream about because it's so far-fetched growing up as a kid, so to have the opportunity is something that I can't even describe. It’s an honor to represent Team USA.”

Bourque, 31, is currently the American Hockey League's leading scorer with 39 points (11 goals, 28 assists) in 35 games this season. An alternate captain with Hershey, Bourque leads the club in all offensive categories, and his 28 assists are tied for the most in the AHL. The Boston, Mass. native has previously represented Team USA at the 2005 and 2006 World Junior Championships, and led USA to the 2013 Deutschland Cup title.

"The entire Hershey Bears organization is thrilled for Chris Bourque," said Hershey Vice President of Hockey Operations, Bryan Helmer. "This is an incredible honor for Chris and something that he deserves. He has been a large part of our organization for many years, and his play on the ice this year once again cements his legacy as one of the best to ever play the game at this level. We're excited to see Chris skate for Team USA in the Olympics, and know he'll do us proud."

Bourque is in his ninth season with Hershey. He is the AHL’s career scoring leader among active players with 678 points (230 goals, 448 assists) in 693 games with Hershey, Hartford, Providence, and Portland. Bourque has captured two AHL scoring titles (2012, 2016) and was named league MVP for the 2015-16 regular season. Bourque also ranks among the AHL’s all-time playoff leaders with 82 assists (first) and 117 points (fourth) in 133 postseason games played (second), winning three Calder Cup championships with Hershey (2006, 2009, 2010) in five trips to the Finals and earning MVP honors for the 2010 postseason. Bourque, who has also skated in 51 National Hockey League contests with Washington, Pittsburgh and Boston, has been a First Team AHL All-Star selection three times.

The forward has collected 572 points (190 goals, 382 assists) in 575 regular season games with the Bears. He ranks fifth in team history in points, eighth in goals, and fourth in assists. He also ranks first in franchise history with 86 points in the playoffs. Bourque made his fifth AHL All-Star Classic appearance last January, serving as the playing captain for the Eastern Conference.

Bourque will be part of Team USA’s final 25-player roster which is comprised of college players, American Hockey Leaguers, and Americans playing professionally in Europe. The National Hockey League did not release players to participate in the 2018 PyeongChang Winter Olympic Games. Bourque and Team USA open their schedule with a preliminary game on Feb. 14 versus Slovenia. The Men's Ice Hockey Schedule runs through Feb. 25 when the Gold-Medal game will be played.

The Bears are currently on a holiday break, but the club will hold a media availability with Chris Bourque on Friday, Jan. 5 at Giant Center following the team's 10:30 a.m. practice. Media are asked to RSVP to Zack Fisch, Manager of Hershey Bears Media Relations and Broadcasting, at zasfisch@hersheypa.com.

The trademarks OLYMPIC, OLYMPICS, PYEONGCHANG 2018, and TEAM USA are registered and owned by the United States Olympic Committee, and are used with permission.