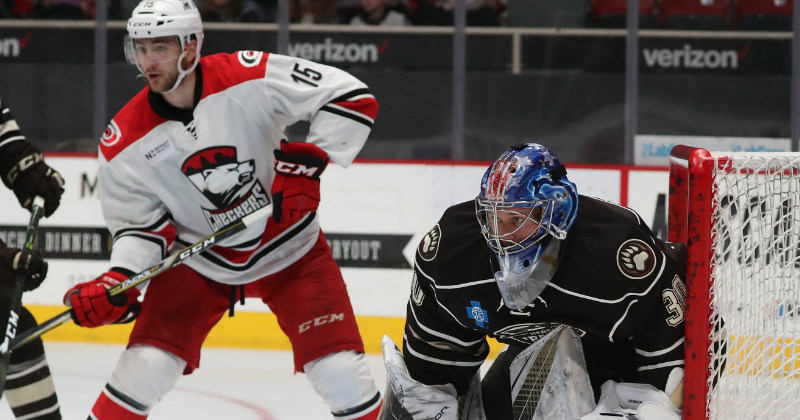 Bears Hang On to Beat Charlotte, 5-4

The Hershey Bears posted a five spot on the Charlotte Checkers in the first period, and fought off four unanswered goals to capture a 5-4 victory Wednesday night at the Bojangles Coliseum. Vitek Vanecek made 35 stops in the winning effort, as the Bears visited North Carolina for the first time since the 2013-14 season.

Hershey drew first blood less than two minutes into the contest while shorthanded. Following a delay of game penalty assessed to Hershey's Liam O'Brien, Colby Williams tipped a Tyler Graovac shot to give his club a 1-0 lead. The tally was the club's sixth shorthanded goal of the season at the 1:57 mark.

Secondary scoring continued to make its mark in the first period, as Anthony Peluso scored his second goal of the season at 6:45 for the Bears. From beneath the goal line, Peluso banked a shot into the cage from a bad angle to make it 2-0 Hershey.

Only 2:50 later, Wayne Simpson added an unassisted tally to spread Hershey's lead to 3-0 on their fifth shot on goal of the night.

Travis Boyd stretched the Hershey lead to 4-0 with a power play goal from the top of the left face-off circle at the 14:12 mark. Boyd's fourth of the season chased Checkers' goaltender Alex Nedeljkovic from the game, ending his night after stopping just five of nine shots.

Jeremy Smith entered the game in relief, and Hershey greeted him with a goal only 14 seconds later. Riley Barber stormed the offensive zone on a quick up-ice look and beat Smith with a snap shot after a feed from Graovac. The goal turned out to be the eventual game-winning tally.

Charlotte received the last laugh in the opening frame with a tally at 17:57. Julien Gauthier beat Vanecek low to the ice to round out a six-goal first period, and put the Bears up 5-1 after 20 minutes.

In the middle frame, the Checkers began chipping away at their steep deficit and pulled within two by second intermission. Aleksi Saarela blasted a shot from the perimeter that beat Vanecek upstairs to make it a 5-2 game at 8:57.

Later in the stanza, after a successful kill of a 5-on-3 for one minute, Charlotte capitalized on the ensuing 5-on-4. Warren Foegele followed his own shot and potted his 15th goal of the campaign on the rebound at 14:23.

In the third period, the Checkers pulled within one on their second power play goal of the night at 12:00. Sergey Tolchinsky blasted his fourth of the season past Vanecek immediately following an offensive zone face-off.

Despite the extra attacker on for Charlotte in the final two minutes, the Bears prevailed to improve to 13-14-0-3, while Charlotte dropped to 19-10-0-1. Charlotte outshot Hershey 39-18.

The teams rematch tomorrow in Charlotte. Puck drop is slated for 7 p.m. The Voice of the Bears Zack Fisch has the call with pregame beginning at 6:30 p.m. on the Bears Radio Network.