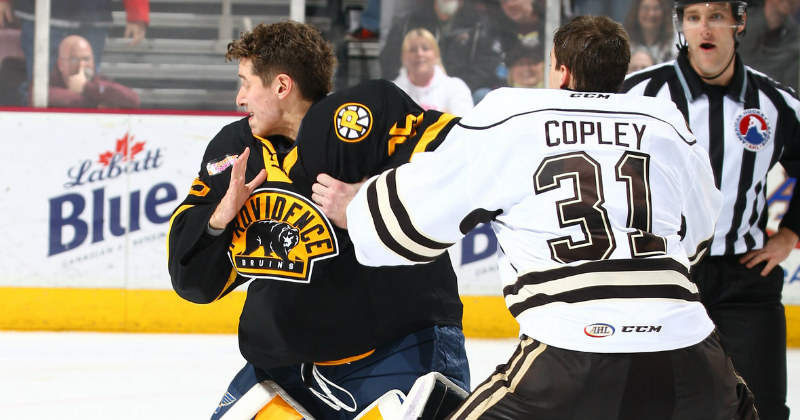 The Providence Bruins scored three goals in the first period en route to a 6-2 victory over the Hershey Bears on Saturday evening at the Giant Center. The loss was Hershey's third straight defeat, with all three losses coming on home ice.

The highlight of the contest for Bears fans came at the 6:40 mark of the second period when the teams engaged in a brawl that saw the goaltenders fight. Hershey's Pheonix Copley dropped the gloves with former teammate Jordan Binnington, and the two goalies scrapped while Hershey's Garrett Mitchell and Tyler Lewington were also engaged in scrums. Mitchell, and both goaltenders received game misconducts.

Hershey responded to the fight with a pair of goals, as Riley Barber struck shorthanded at 10:27 of the second period, beating new Providence goaltender Zane McIntyre with a wrist shot over the glove from the slot to make it 4-1.

At 9:33, the Bears inched closer and pulled within two on the power play. Liam O'Brien deflected a shot from Aaron Ness, trimming the Bruins' lead to two.

However, the comeback was too little, too late as the Bruins added two goals in the third period to seal the win. A strong first period for the Bruins was too much for Hershey to overcome. Providence's top line of Jordan Szwarz, Kenny Agostino, and Austin Czarnik scored all three goals in the opening frame, with Czarnik finishing the night with three points (one goal, two assists), and Szwarz and Agostino tallying a goal and an assist each.

Saturday was Hall of Fame Night, and in a pre-game ceremony, honored by the Hershey Bears Hockey Club Hall of Fame Committee as the sixth group of enshrinees were Dave Fenyves (player), Andre Gill (player), Doug Yingst (builder) and Randy Waybright (general). NHL broadcaster Mike "Doc" Emrick was the emcee for the event.

Hershey returns to action for two games in Charlotte next week. The Bears visit the Checkers on Wednesday, December 20 at 7 p.m. Zack Fisch has the call on the Bears Radio Network.